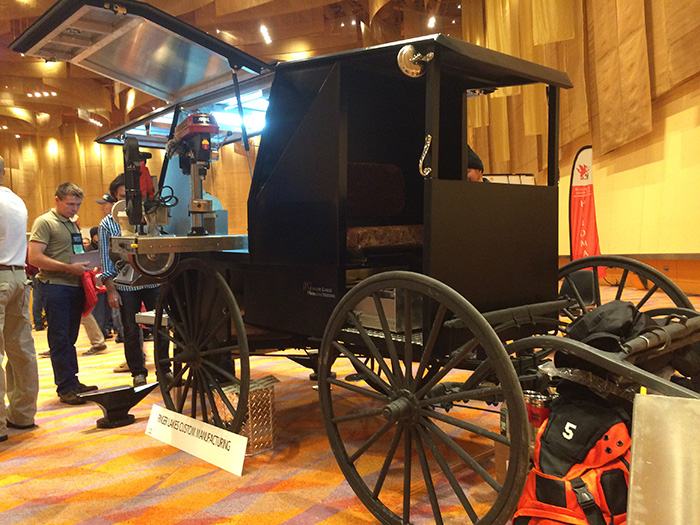 Neal Purdy and his team at Finger Lakes Custom Manufacturing created a buzz at the 2016 International Hoof-Care Summit with the Amish horse-drawn buggy that was outfitted as a farrier rig.

“Did you see the buggy?”

Each year there are moments that create a buzz at the International Hoof-Care Summit in Cincinnati, Ohio. The 13th annual event had a number of them including Renate Weller describing the safety ratio of a horse’s limb; Thilo Pfau demonstrating gait analysis with a smartphone; and Martin Kenny illustrating how camera position can greatly alter how the foot is perceived.

Another buzz-worthy moment arrived on the first day of the Summit Trade Show when Neal Purdy of Finger Lakes Custom Manufacturing in Skaneateles, N.Y., unveiled his customized horse-drawn Amish buggy.

“It turned out pretty well,” Purdy says. “It’s a conversation starter, but it’s also a little taste of the creativity and craftsmanship that we offer. I don’t like doing the same old stuff. It’s just a little twist on things — a modern touch in the shape of a buggy.”

The twist that Purdy and his team gave to the buggy was converting it into a working farrier rig complete with propane tanks, a drill press, grinders, swing-out anvil and forge, as well as other conveniences that you might find in an otherwise typical setup.

“We put the shoe rack under the seat in the cab,” Purdy explains. “There’s no wasted space.”

Farrier Jeremey Fox, a representa­tive of Finger Lakes Custom Manu­facturing, found the buggy in his home state of Virginia and acquired it from an Amish gentleman. After mapping out where everything would go, the refurbishing process went rather quickly.

“It took about 20 hours over 4 days to complete the project without paint,” Purdy says. “We were just flying by the seat of our pants. It’s pretty different.”

To say that the buggy drew a crowd would be an understatement.

“That’s what you call a sweet ride,” said Ken Best of Northport, N.Y., as he admired the buggy.

With less than a month to go before the 14th annual Summit opens its doors, it leaves one wondering who will create a buzz in 2017 in Cincinnati.