Explore helpful tips on everything from educating clients, getting them to buy into footcare strategies, billing, relationships and much more.

Is there any relationship between a horse with poor quality feet and its body condition?

Is copper sulfate a good treatment for thrush?

January 15, 2021 | Posted in Clients, Education, Nutrition
While the success rates are remarkable, equine nutritionists are still looking for answers on those few horses when biotin doesn’t seem to do the job every time. Hoof Nutrition Intelligence is brought to you by the International Hoof-Care Summit.
Read More
News Release

Dechra and Kindred Biosciences Team Up to Distribute Pyrexia Drug

By American Farriers Journal Staff posted on January 11, 2021 | Posted in Business Practices, Clients, Disciplines & Breeds, Education, Equipment, Diseases, Lamenesses, Safety & Healthcare, Shoeing, Therapeutic Shoeing, Trimming
With the new year underway, the American Farriers Journal editors gazed into our crystal balls and made a few predictions on what we might see in the equine footcare market over the next 12 months.
Read More

It’s more than just the feet, as professionalism and business management practices are also a major concern when owners decide to change farriers
By Frank Lessiter posted on January 6, 2021 | Posted in Business Practices, Clients
Out of the blue, a client texts to say they’ve found another farrier. They may have a reason, whether good or bad, and explain to you why they’ve decided to switch farriers. Or you may never know why they made a change.
Read More

Shoeing for a Living

New York farrier Justin Galli says going with the flow is crucial when show schedules have been disrupted by COVID-19
By Jeremy McGovern posted on January 5, 2021 | Posted in Business Practices, Clients, Disciplines & Breeds, Lamenesses, Shoeing
Farriery is in the Galli family blood. The family’s shoeing legacy dates back to Fondi, Italy, when blacksmith Orazio Savocchio immigrated to Millbrook, N.Y., in the early 20th century. He changed his name to Galli — another family’s name back in Fondi — because the longer name was difficult for non-Italians to spell or pronounce. His son Louis continued into the trade, later passing the torch to his son Paul. Fourth-generation farrier Justin Galli carries on the family tradition, following his father into the trade about 25 years ago.
Read More

By Jeremy McGovern posted on January 4, 2021 | Posted in Business Practices, Clients, Education, Shoeing, Trimming
I recently read a tribute posted to Facebook about the late farrier Bob Skradzio. The International Horseshoeing Hall of Fame member passed away more than 10 years ago, but is remembered by the countless farriers he impacted through his 60-plus years as a horseshoer. He was a link to industry history — one of the last to work street horses in an urban area who transitioned to a largely recreational riding practice.
Read More
2020 in Review

By American Farriers Journal Staff posted on January 4, 2021 | Posted in Business Practices, Clients, Diseases, Lamenesses, Nutrition, Shoeing, Therapeutic Shoeing, Trimming
How hind end geometry can improve equine performance and balance, testimonials for Farriers Week and when to incorporate alfalfa into the diet of insulin resistant horses were among the topics covered in some of the most-read articles of July 2020.
Read More
Hoof Nutrition Intelligence

January 1, 2021 | Posted in Clients, Education, Nutrition
Lower limb wounds in horses sometimes develop excessive granulation tissue during the healing process. Known as proud flesh, the cause of its proliferation remains unclear. Hoof Nutrition Intelligence is brought to you by the International Hoof-Care Summit.
Read More
More Articles Tagged with 'Clients' 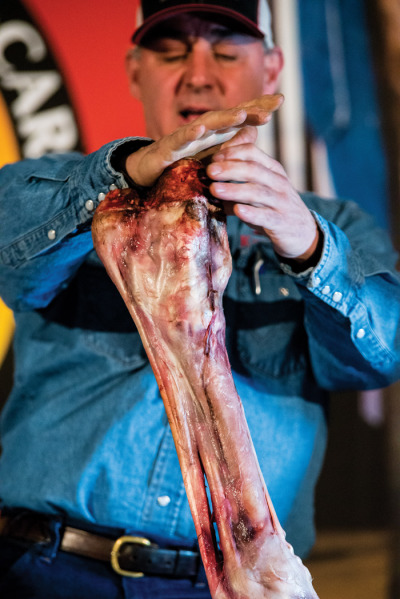 Free eGuide &mdash; COVID-19: Caring for Your Horse During a Pandemic

Pass Along These Articles To Backyard Horse Owners Who Need Help