International Horseshoeing Hall Of Fame will be part of construction

The Kentucky Derby Museum, home of the International Horseshoeing Hall Of Fame, announced a $6.5 million expansion project on Thursday that will create more than 11,000 square feet of new space in addition to renovating 5,000 square feet of current facilities.

Expansion will allow for more exhibit space to display more of the museum’s vast collection. According to Louisville Business First, its collection holds more than 10,000 items — but the current facility can only display 11% of their collection.

Following record-setting attendance records in 2017, the museum’s board of directors aims to enhance the overall visiting experience.

“With this expansion, we’ll create a new, dynamic way to present our mission to engage, educate and excite everyone about the extraordinary event that is the Kentucky Derby to guests from around the world,” according to Kentucky Derby Museum President and CEO Patrick Armstrong in a news release.

New displays will include trainer D. Wayne Lukas’s recently acquired collection, as well as pieces from jockey Bill Shoemaker that were formerly housed in the Museum’s archives. 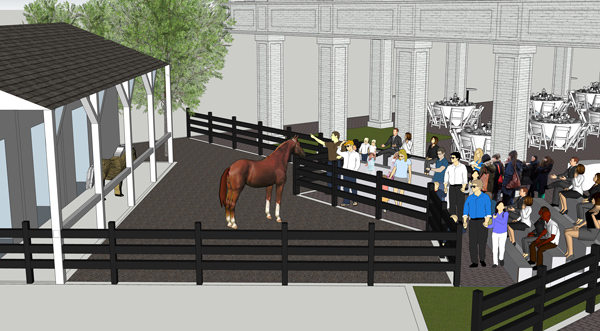 Exhibit plans are in the early stages for expanded and renovated portions of the museum. The International Horseshoeing Hall Of Fame exhibit will be part of these plans, but details have not yet been finalized, Museum Communications Manager Lindsay English told American Farriers Journal.

The International Horseshoeing Hall Of Fame was established in 1992 to honor farriers around the world who have made significant contributions to the profession and who have left a permanent, positive impression on their peers and clients.

Other additions will include more than 7,400 square feet of covered space for parties, weddings and other outdoor events.

Construction will begin after Kentucky Derby 2018 and is expected to be complete by November. The museum will remain open throughout construction.