By Richard Becker posted on January 26, 2018 | Posted in Business Practices

To some this is just an old invoice. But as a farrier, I see the history of our trade. It also tells me of the value of a farrier. The invoice on this page is from services performed by farrier Daniel Ward for the New York City Fire Department. These horses would pull the fire engine. A client of mine gave it to me after she had bought it for 50 cents at a yard sale in New York state.

Take note of what is on this invoice, which covers this account for the entire month of September 1899. Four new shoes and two pads for $5, $3 for four new shoes. No resets here. So $3 for new shoes, $2 for the pads.

In that time period, people better understood that their horses had to work, and they needed the horseshoer to keep it working. And horses like these were hard workers. Often, if a working horse of this period reached aged 10, it was already old and used up.

By the way, isn’t it interesting how invoicing of pen to paper hasn’t changed over time? Maybe it is a little fancier on the head. But if you are still using paper invoicing, is your system all that different? And that it is direct to work on “All Lame and Interfering Horses” — it makes him sound like he’s a specialist. And since veterinarians didn’t need licenses back then, maybe he was as a horseshoer-veterinarian. I have so many other questions about this invoice and what we can learn about how farriers worked back then.

But, back to the pricing. Think about how the industry has changed since this invoice was written. Farriers back then didn’t have vehicles to drive around, they just had a shop. Often that shop was at their home. Daniel Ward’s Horseshoeing Establishment was listed on the invoice with an address, on the corner of 28th St, and Third Ave. They brought the horses to Ward. 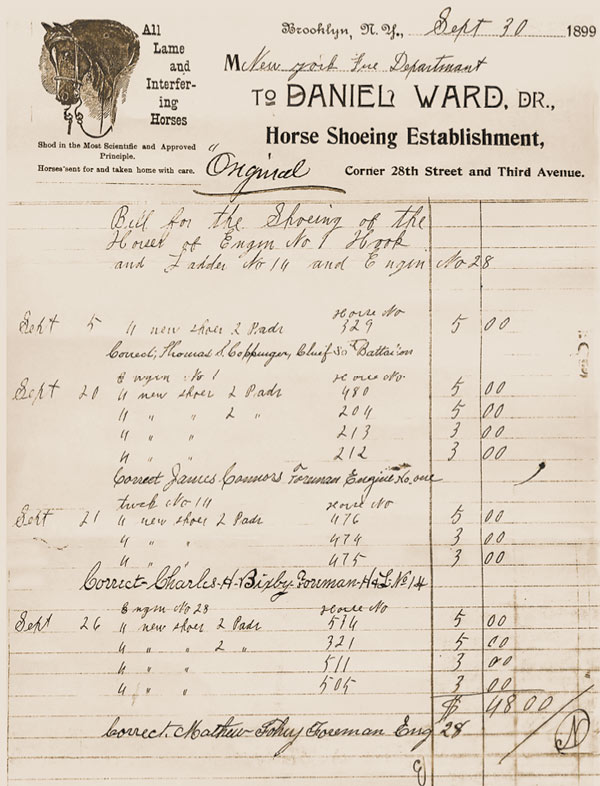 Sure, most blacksmiths today have a shop at their house, but not farriers. Today, we mostly drive to the client. That’s a shop on wheels. Think about the cost of trucks today. Add the fuel, maintenance, shoeing body and insurance. That’s just part of the way to get your shop to the client. What about the different types of insurance we should carry as farriers? How many had insurance back then and what was even available to them? Today you can’t live without it.

So take what this horseshoer was charging. Consider his lower costs. The profit margin on the shoeing job was a heck of a lot more then than it is today. When you take his profit margin and then calculate all of the costs that farriers today take on that they didn’t need to back then, I think we are approaching $300 for quality farriery for a working horse with four shoes and two pads in today’s pricing.

How many clients would be willing to pay $300? Well, when I later told the client who gave me this invoice that after I added and calculated my expense, I should start charging her $300, she laughed and said, “No way.” It was a good joke with her.

Richard Becker is a farrier based in Lapeer, Mich., and is a 2018 inductee to the International Horseshoeing Hall Of Fame.

Shoeing Apron Or A Suit And Tie, I'm A Business Guy