By Steve Stanley posted on May 19, 2017 | Posted in Lamenesses, Shoeing
Source: Hoof Beats 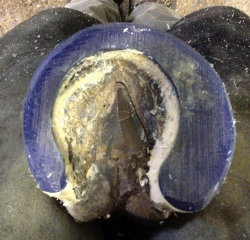 (Photos by the author) Fig. 1: Lateral extension shoes can be used to treat angular deformity of the fetlock.

As foals develop into weanlings and then yearlings, it is important to establish and maintain hoof capsule balance.

Because of the rapid growth during the early stages of life, it is possible to correct irregular conformation in the foal through a combination of hoof mechanics, surgery, and barn management.

At this year’s International Hoof Care Summit, Dr. Scott Morrison of Rood & Riddle Veterinary Clinic stressed the importance of establishing proper hoof capsule proportions early in a foal’s life. As the skeletal base of the horse, development of the lower limb bones is critical to that horse’s success as an adult athlete. The rapid evolution of these foals offers a window of opportunity for correction. Bone growth in the young horse is so prolific that P3 (coffin bone) fractures in foals often have little lasting consequences after they have healed.

First, I want to explain the difference between angular and rotational deformities. Angular deformity is referring to the vertical alignment of the bony column, specifically through the fetlock and knee joints. Severe cases require surgical assistance. 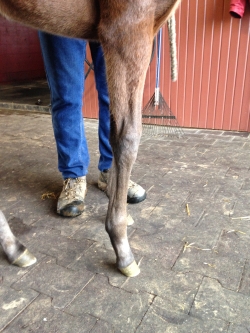 Fig. 2: A mild flexor contraction of the knees can be treated with leg bandages.

Rotational deformities are pretty much self-explanatory. Angulation of the fetlock joint is the most time-sensitive area to address. The growth plate of the fetlock joint closes between 90-120 days. Realistically, any changes we try to make should be done before 90 days. If surgery is a consideration, most veterinarians prefer surgery at 45-60 days of age, giving them 30-45 days of active growth in that fetlock region to effect changes.

When dealing with fetlock angulation of foals, it is always preferable to involve a surgeon in the decision process. As farriers we can add lateral or medial extensions (almost always lateral as most fetlock angulation is varus, or inward). Dr. Morrison cautioned that extensions should not be put on foals less than two weeks old to guard against possible laminar tearing within the hoof capsule due to the leverage forced upon the hoof that extensions create.

Also noteworthy is that extension shoes (Fig. 1) disperse that leverage across the entire ground surface of the hoof instead of only one side the way traditional extensions do. With foals, care should be taken not to leave shoes on too long; 2-3 weeks I believe is the maximum time since we are restricting the growth of that hoof during its rapid evolution. 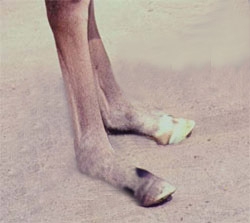 Fig. 3: Flexor laxation of the lower hind leg usually corrects itself over time, but a severe case like this can be treated with heel extensions.

Rotational deformity in the lower leg is often influenced by the conformation of the knee. It is a mistake to evaluate lower limb conformation without considering the influence from the upper leg, chest, and overall development or, more often, lack thereof. When a young foal is toeing out in what seems to be severe deformity, it is often from an under-developed chest and knees that rotate away from each other. Horses like this usually self-correct as they mature. Surgically or mechanically correcting an early foal with outward (valgus in veterinary terms) deviation could be a huge mistake.

Flexor deformities in foals are another situation that often self-corrects. A mild flexor contraction (Fig. 2; the knees are bucked slightly forward and feet in a mild upright position) can be treated quite effectively with barn management. This foal was treated by alternating leg bandages (12 hours on, 12 hours off) and stall rest with restricted turnout time. Three weeks later, this foal had responded well.

Dr. Morrison pointed out that contraction deformities can also be treated by a veterinarian with Oxytetracycline injections in the first two weeks of age, but cautioned that if any other legs show flexor laxation, Oxytetracycline should not be used. The foal in Fig. 2 had mild laxation in the rear legs and was not treated with medication.

Flexor laxation of the lower hind leg usually corrects on its own with maturity. The caveat to this is protecting the severe cases from injury (Fig. 3). If the back of the fetlock is touching the ground with the toe of the hoof pointing upward and not weight-bearing, then intervention is needed to prevent a possible lasting injury. Heel extensions that lock the dorsal hoof wall into the lever effect will help these horses quickly and significantly. 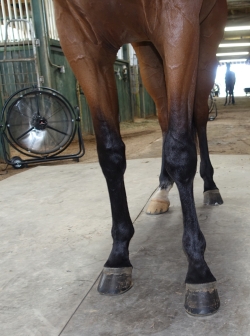 Fig. 4: This adult horse had an uncorrected angular deformity in his knees and now interferes while racing.

Moving up the leg, severe angular deformities in knees (Fig. 4, which shows an uncorrected adult horse that now is a knee-knocker) or hocks should be addressed early in the foal’s life as it will affect lower leg development. A veterinary surgeon should be consulted in these situations. The maturity stage of knee development is between 18-24 months of age, which could be before a late foal competes in 2-year-old races in May.

With bench knees (knees offset behind the feet), the surgeons I have talked with don’t offer much intervention, primarily because there is no angular deformity. Bench knees are a vertical misalignment at the knee joint between the cannon bone below the knee and the radius above it. Both bones are vertical, but the cannon bone is offset laterally from the radius. This stance tends to drive the lower leg into a toe-in (varus) conformation. With offset knees, I will put the widest lateral extension shoe that will fit that hoof to minimize distortion, as in Fig. 1. Racehorses with offset knees often crush the lateral heel of the same hoof inward and bruise the medial heel.

With any conformational issues, the earlier we intercede the better our chances of success. Getting the breeder, farrier, and veterinarian on the same page is key to avoiding problems that could have been prevented. A regular evaluation schedule is the way we find those problems early enough to help.

Just like buying or training these animals, it takes a lot of time looking to find those hidden gems.

Hoof Beats: The Language Of Conformation