One thing the flip flop is not great for is sore heels, which are prominent among performance horses of all breeds. Because of its large area covering those heels and the thickness of the pad itself, they seem like a logical choice to improve the sore-heeled racehorse.

One of the main reasons horses get sore and bruised heels is because of uneven loading during the landing phase of each stride. The force of landing in this situation is concentrated into smaller areas because the hoof is not striking the racetrack evenly across both heels and frog of that hoof. The side of the hoof (medial) that is taking most of the force can become sore, bruised, or abscessed. The reason a flip-flop doesn’t help this situation is because the malleable composition of a flip-flop simply conforms to that uneven landing (Fig. 1). 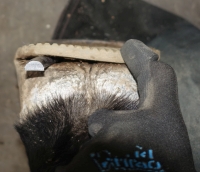 (Photos by the author) Fig. 1: A flip-flop pad will conform to an uneven landing surface.

Circuit plates and bar shoes (Fig. 2) help these horses because they do not conform to the force of landing and help distribute that force over the larger area, lessening the intensity. They also can help to stabilize the caudal part of the hoof, allowing the farrier to begin reversing the hoof distortion associated with these horses such as heel shear and contracted heels, two conditions on which flip-flop pads have little or no effect.

Last fall, Dr. Paul Nolan, a well-respected veterinarian on the Grand Circuit trail, noticed heel pain on a horse he was treating. Dr. Nolan diagnosed this horse expertly through digital X-rays, hoof testers, and palpation of the digital pulse going into the front feet of this horse. He asked if we could find a shoeing solution that would relieve or abate the heel pain.

After explaining how a more stable type of shoe might help alleviate the heel pain, this horse’s trainer gamely agreed to try them. I say “gamely” because the horse was to race for $100,000 in a matter of days and $1 million in less than two weeks. The trainer decided that now was the time to experiment--not before the bigger race. 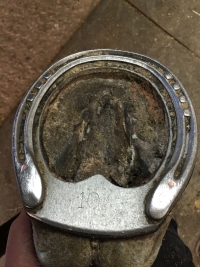 Fig. 2: Circuit plates and bar shoes help distribute the force of landing over a greater area.

I applied a circuit plate and leather rim pad, along with same shoe type he had on before, which was a full swedge. Fig. 2 is the actual shoe on the horse weeks after and having been reset.

Before revealing the name of this horse it is extremely important to give his history. He had already earned more than $1 million before he ever came to me at Red Mile in Lexington, Ky. This obviously means that he had been expertly trained, driven, shod, and vetted for quite some time. We were only addressing his current status. Anyone who has been in the racehorse business more than a week can attest that a racehorse’s “current status” is a day-to-day situation and is as fluid as a winding river. I think it was Thoroughbred trainer Bob Baffert who said “Racehorses are like strawberries. They can go bad overnight.”

The horse in question is Flanagan Memory 1:51.2s ($1,533,070), trained by Rene Dion. The 7-year-old trotter had not “gone bad,” but had a recently developed issue. After veterinary assistance, a slight shoeing change, and much hard work in the barn treating and packing his feet, he won the $101,000 Allerage Farms open trot on Kentucky Futurity day, finished third in the $1 million Yonkers International Trot, and won the $500,000 Breeders Crown Open Trot at the Meadowlands two weeks after that.

Flanagan Memory is a graphic example of why the flip-flop pad is not always a great application when it comes to heel pain. The strong finishes he displayed in these races, along with showing very little shoe wear (Fig. 2), is evidence of a sound horse.

I have written before that sore feet always show themselves in the final quarter. Heel pain is a constant nemesis at racetracks and other equine performance venues. With diligent awareness within the stable, early diagnosis and treatment, a horse like Flanagan Memory can create many lucrative memories for his connections.