Mother nature and breeding sheds can have a huge influence on hoof care.

For example, an older mare that gets very heavy and is due to foal in the cold weather should be given careful consideration in terms of her trim schedule. Since her body is already enduring the stress of pregnancy, we should be acutely sensitive to the chances of adding to that stress load during hoof care.

In a warmer-than-normal winter, the extreme temperature fluctuations should be considered when scheduling the farrier in your foaling barn. In Kentucky last December, we had a week of warm, rainy days, followed by extreme cold. This can wreak havoc on a horse’s hoof. Compound that by trimming the hoof right before the cold hits and you have a recipe for trouble. Those marshmallow-soft (and now short) hooves are walking around on rutted and frozen ground. This additional stress can push a broodmare over the edge; too much stress and the body will protect itself by causing an early--or even aborted--foal. 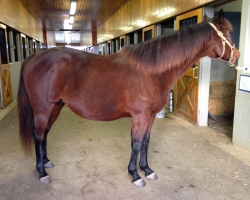 (Photos by the author) Fig. 1: Heavy broodmares should not be given a full hoof trim, as the trauma from soft hooves on frozen ground could cause complications in the pregnancy.

When trimming in a foaling barn, I will always consider these factors, especially on the heaviest mares (Fig. 1) that are due to foal early in the winter months. Most of the time, simply scheduling those mares well ahead of the foaling date is wise. Often I have skipped a mare if she is very close to foaling and then come back to her after she has had the baby.

Most of the time, a conservative trim will do. In Fig. 2, I have rounded this mare’s hoof very little, rasping her heels down just far enough to engage the frog. I was careful not to touch the sole of her hoof at all. The grooves beside the frog (sulci) have been opened just enough to allow debris to clear the hoof cavity.

If a broodmare is already uncomfortable before she gets trimmed, I recommend a consultation with the farrier and a veterinarian. The mare may need shoes with a full pad across the bottom of her hoof to get her through the final stage of her pregnancy, or possibly even some type of therapeutic horseshoeing package. The last place we want to be is having a sore-footed broodmare well before she is due to foal.

Even in ideal circumstances and weather conditions, too many times I have seen mares--that were due or overdue--foal the night after trimming. This tells me all I need to know about the possible repercussions of aggressive trimming or bad timing of the trim on these mares.

A little pre-planning or situational awareness can keep a mare from getting into trouble. Older mares that get very heavy during late-stage pregnancy are the ones to watch closely. Since they are already being watched closely in terms of pregnancy, it doesn’t take much more time to check her feet more often than normal for a broodmare. 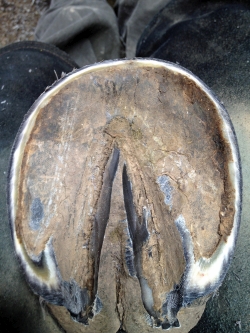 Fig. 2: This pregnant broodmare's heels were just rasped down enough so that the frog could engage with the ground again.

The geriatric horse falls under the same category in terms of harsh weather changes and their ability to handle that stress. Since hoof growth slows in the later stages of a horse’s life, it should be an easy thing to skip them entering a cold snap and, as with late pregnancy, just pick up those trims when the weather moderates.

Most horses adapt to winter very well and extreme conditions seldom last more than a few weeks. Horses that spend the entire winter in northern climates also do well. The real stress to horse and hooves is in rapid climate change.

Global warming? Don’t know and I don’t spend much time thinking about things I cannot control, but when it’s 5 degrees one week and 60 degrees two weeks after, I spend a good deal of time deciding how to keep tender-footed clients from being left out in the cold.