I have written much about the hoof dissipating a great deal of the impact forces between the horse and the ground and want to illustrate two of the main components of that effect. 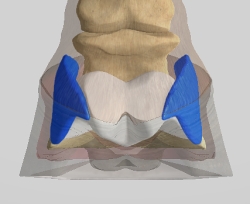 Figs. 1 and 2 show the medial and lateral cartilages of the distal phalanx (coffin bone), illustrated here in blue. These are also referred to as the ungual cartilages. The white structure between them (Fig. 2) is called the digital cushion. The ungual cartilages extend proximally (upward) into the lower fetlock region and can be palpitated easily through the skin in the area indicated by the strips in Fig. 3. They also extend distally into the hoof cavity about the same distance as they can be palpated from the coronary band up.

When healthy, these cartilages are firm, yet slightly malleable to the fingers. Ossification of these structures is known as sidebones and can lead to a lame horse. This ossification can be caused by narrow, upright feet, which might even be hereditary. Unbalanced feet, as well as continuous work on hard surfaces, can also lead to sidebones. Amish horses probably have a higher occurrence than racehorses because of the miles of work put onto rock-hard roadways.  The health of these ungual cartilages is reasonably easy to monitor if one knows to look; however, the earliest stages of sidebones are normally found by X-rays. 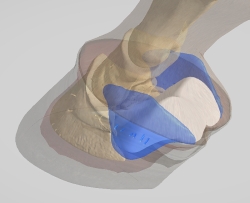 Figure 2: The digital cushion is indicated in white between the medial and lateral cartilages of the coffin bone shown in blue.

As a non-rigid structure, the collateral cartilages can be remodeled by the forces on and changes to the hoof capsule. Sheared heels, club feet, and under-run heels all can have an effect on the collateral cartilages (yet another name for these structures). (Ungual, medial/ lateral, and collateral are three terms for the same cartilages. I believe an anatomist should be able to list multi-lingual as part of their resume as it seems to be a language unto itself even apart from the Greek and Latin which dominate anatomy books. Anatomy terms can get confusing with many terms for the same body part.) I believe the collateral cartilages are an underused diagnosis indicator when it comes to hoof health in the caudal region of the hoof.

The digital cushion (Fig. 1, between the collateral cartilages illustrated in white) is a key component of shock absorption within the hoof. The digital cushion is a fibrous fatty tissue that diverts the downward forces of the bony column above and redirects those forces outward into the collateral cartilages. It continues into a system of blood vessels known as the venous plexus, creating a hydraulic cushioning effect that happens when the vessels are compressed by the ungual cartilage.

“Each time the foot bears weight, the large veins of the foot are compressed and blood moves,” Dr. Doug and Jacob Butler wrote in The Principles of Horseshoeing Part III. “Each time the foot is raised, the plexus “valves” open, and the blood is pushed into and on through that foot by the arterial pulse assisted by gravity.” 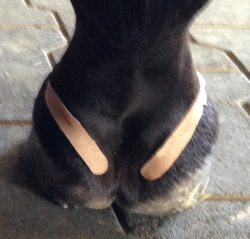 Photo by the author

Figure 3: The ungual cartilages extend proximally (upward) into the lower fetlock region and can be palpitated easily through the skin in the area indicated by the strips.

Something I believe to be noteworthy on that thought is from Mitch Taylor of the Kentucky Horseshoeing School. While dissecting a severely under-run hoof, Taylor pointed out how significantly atrophied the digital cushion was within that particular hoof. It is definitely something to consider when shoeing that type of foot.

Another circumstance to consider is the type of horseshoes that reduce or stop this heel expansion, such as glue-on shoes. When an inflexible glue is attaching a rigid shoe to that heel area of the hoof, I believe it is common sense to conclude that the shock-absorbing mechanism of that hoof is compromised. This is one reason I feel that a traditional glue-on using a metal shoe should be a temporary situation, and I would never expose an underrun hoof to this type of application.  The advent of polymer (and thus more flexible) shoes in glue-on situations have probably stemmed from this line of thought.

The equine athlete is an incredible specimen. They are fast, powerful, dynamic, and yet at the same time, fragile. Without the complex cushioning that occurs within a hoof, the delicate coffin bone would never endure the rigors of performance and the horse would not have influenced world history, and our own current lives.

The horse was first used in battle more than 5,000 years ago. That had to be the first case of “shock and awe.” Without the hoof’s ability to absorb the shock, we humans would never have enjoyed--or feared--the “awe.”