Anybody associated with performance horses as a career has seen, and had to deal with, tendon injuries. A bowed tendon is one of the most prominent and debilitating injuries in horse racing. 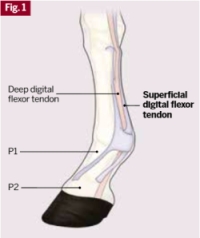 The natural predisposition of a Thoroughbred landing on a single hoof and traveling at faster speeds make them more vulnerable to this injury than Standardbreds, but tendon injuries span across all disciplines of performance horse endeavors. The focus here will be on the superficial digital flexor tendon (SDFT) of the front leg, as shown in Figure 1. This structure is the bowed tendon culprit we all know and hate.

Tendons are the connection between muscle and bone. The SDFT originates from the superficial digital flexor muscle (SDFM) at the carpus (knee) level, extends distally (down) behind the knee. It then continues down the back of the leg and forms a collar-like structure which encases the deep digital flexor tendon (DDFT) at the sesamoid level. The SDFT then divides (bifurcates) below the fetlock and inserts on the distal (lower) end of P1 (long pastern) and proximal (upper) end of P2 (short pastern) on each side of the pastern joint.

In terms of shoeing, I believe the insertion above and below the pastern joint has important implications. First, since the SDFT does not enter the hoof capsule at all (unlike the DDFT), changing hoof angle has a lesser effect on that structure. Second, because of the complex attachment of this tendon at the pastern joint, anything that changes pastern alignment, such as high toe grabs, delayed break-over or long, distorted toes, or even an unlevel hoof, can have a negative impact on the SDFT.

This is not to say hoof angle has no effect on SDFT, just that it is less significant than on the DDFT which inserts into P3 (coffin bone) well within the hoof capsule and can be manipulated more significantly by hoof angle.

The SDFT assists the lower limb in weight-bearing and, considering the load and recoil effect, has a significant impact on locomotion as well.

“During maximal exercise, the adult SDFT operates close to its functional limits with a narrow biomechanical safety margin,” wrote B.A. Dowling and A.J. Dart in the September 2005 Veterinary Journal.

In his book titled, “The Lame Horse: Causes, Symptoms and Treatment,” Dr. James Rooney describes the situation in which a SDFT tear may occur as follows.  The downward force being exerted on the leg is too great to allow the pastern to lift. The forward momentum of the horse’s body, however, continues and the fetlock bends back too far, increasing strain on the superficial flexor tendon (Figure 2). This happens because the SDFM (muscle origin of SDFT) begins to contract while the weight on that limb is still too great to allow the pastern to rise thereby releasing the tension. Dr. Rooney describes several reasons this may occur, several of which apply to racehorses:

1. A bad step which places the hoof too far under the horse to begin the load phase of that stride;

3. Deep going in the track surface;

He also writes that over the course of a race (one mile or so) those flexor muscles can fatigue against the resistance of delayed break-over. This muscle fatigue can, late in a race, delay heel lift and release further, taking the SDFT to dangerous tension levels. 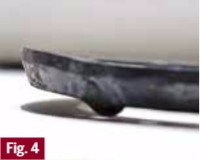 Photo: Steve Stanley Figure 4: A mild rocker toe with borium behind the rocker portion could be helpful for a horse with tendon issues.

In terms of shoeing, a natural pastern alignment and hoof angle are critical to the health of the SDFT. Manipulating the hoof angle away from normal balance is not the answer. In fact, “Current research suggests that raising hoof heel will increase fetlock joint extension, thereby increasing the load on the SDFT and suspensory ligament,” wrote Christopher B. O’Sullivan in “Injuries of the Flexor Tendons: Focus on the Superficial Digital Flexor Tendon.”

Big toe grabs are also trouble because they delay break-over. Yes, slipping was listed as a factor for injury, but there are other places to put traction than in the toe.  Just behind the toe where the nail holes begin might be a better option (Figure 3). A mild rocker toe with borium behind the rocker portion (Figure 4) could be helpful on a horse with tendon issues, or a predisposition for them. Keep these types of horses shod more often. When a shod hoof goes too long, the hoof distorts in exactly the way Dr. Rooney describes as an injury factor. Going too long routinely can exaggerate a hoof dangerously forward of the natural break-over point.

The hoof angle should be a natural extension of the pastern angle; don’t change that. Be very careful with toe grabs, especially on deep racetracks. Ease break-over as much as you can get away with, for example, open toes, square toes, or mild rocker toes. Lastly, keep these horses shod a little more often than normal. Being aware of exactly what is happening within the leg may assist you in preventing a tragic injury or, bringing a horse back from one.

Here is hoping you will not have to bow (kneel) to the bow.