By The Irish School of Farriery

Final year farriery apprentices from the Irish School of Farriery in Kildare Town were approached by the Curragh Racecourse this year to create a piece of art to commemorate the 150th Irish Derby.

The group was eager to undertake the challenge and they commenced work on the project in April under the watchful eye of school instructors Donal Bennett and Brian Dunne.

The finished piece, titled “Irish Derby Globe of Fame,” is comprised of 150 handcrafted horseshoes, each representing 149 previous winners of the Irish Derby and the 2015 winner Jack Hobbs.

The globe was presented to the Curragh Racecourse during the Derby Racing Festival weekend.

As an acknowledgment of their efforts the apprentices were allowed to escort the 2015 Derby jockeys from the weigh-room to the parade ring for the feature race.

The Globe will remain on permanent display at the racecourse. 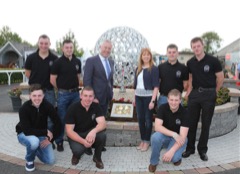