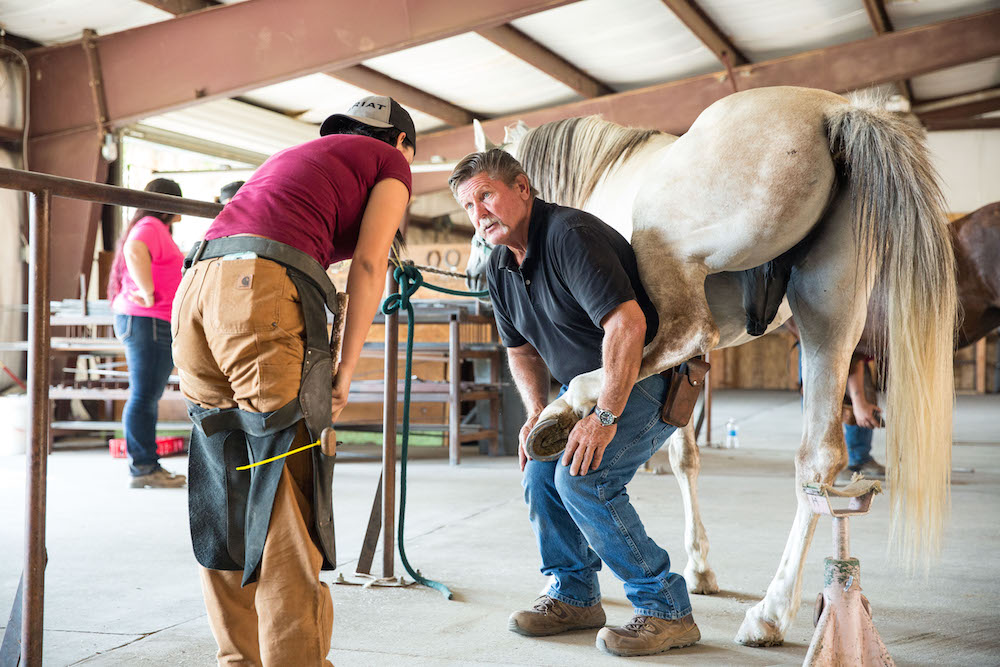 Esteban Narez works hard to provide for his family, but he wants to do more to give them a better life.

Like many Americans, the 26-year-old Watsonville, Calif., man has encountered his share of obstacles along the way. A major injury forced Narez to withdraw from high school during his senior year. Medical bills and family finances have required him to work full-time since then. Narez does his best by working 7 days a week at a ranch in the Santa Cruz Mountains.

Felton, Calif., farrier Cassidy Robyn took notice of Narez’s drive and work ethic while shoeing horses at the ranch and made him a deal — he’d hire him as an apprentice when he successfully completed farrier school.

It was just the opportunity that Narez was looking for — a good, honest living while continuing to work with horses. Shortly thereafter, though, Narez’s hopes for a better life encountered another obstacle. After applying to Pacific Coast Horseshoeing School in Plymouth, Calif., owner Bob Smith had to turn away Narez because he didn’t have a high school degree, GED or hadn’t passed a government-approved exam. If Smith taught Narez, officially or unofficially, the state would shut down the school.

The 2009 California Private Postsecondary Education Act requires all students to earn a high school degree, GED or pass a government-approved exam before entering a private trade or vocational school. The law’s aim was to stifle what’s referred to as “diploma mills” — schools that prey upon underqualified students by issuing bogus credentials after saddling them with a large student loan debt.

Although the law is modeled after a federal law regulating student loans, California takes it further. The U.S. government traditionally screens students who apply for federally funded loans to ensure the material being taught can be understood and learned. However, federal law does not restrict trade or vocational schools from accepting students who pay for their own tuition. California, on the other hand, applies its law to all schools regardless of whether they accept student loans. Pacific Coast Horseshoeing School does not accept student loans.

Bob Smith, owner of Pacific Coast Horseshoeing School in Plymouth, Calif., has filed a federal lawsuit against the state for violating his school’s right to teach horseshoeing to anyone who wants to learn.

Narez is left with few choices — take classes to get his GED or study several hours to take a government-approved exam. Under California law, Narez is too old to return to high school. Narez wants to spend his time wisely, though. Time is money, as they say. Every hour spent studying grammar, reading comprehension, sentence structure, arithmetic and geometry — all areas that are tested — is an hour he could be earning money to support his family. Taking time off from work to learn skills that he can use to build a career is far more valuable to him.

“Basically, I have to work 7 days a week to support myself,” Narez says, “and I can’t afford to take the time off to go learn when it’s not going to help me improve myself to be a better horseshoer.”

President Ronald Reagan once said, “I’ve always felt the nine most terrifying words in the English language are: I’m from the government, and I’m here to help.” California’s law embodies that sentiment for Smith.

“For students with limited education, this law is the biggest obstacle to their success,” says the International Horseshoeing Hall Of Famer. “This law dictates that someone with limited formal education is not allowed to invest in themselves. You don’t have to know algebra to shoe a horse. You don’t have to know how to read a novel to shoe a horse. Horses don’t do math and horses don’t speak English. It makes no sense to require a high school education to learn a trade that was around for centuries before the printing press came along.”

Narez and Smith, with the help of the nonprofit Institute for Justice, want to remove the obstacle that California has set before them by filing a federal lawsuit against the state for violating the right to teach horseshoeing to anyone who wants to learn.

“Just like publishing a how-to book or uploading an instructional video to YouTube is protected by the First Amendment, so is teaching,” says Keith Diggs, an attorney at the Institute for Justice. “In 2010, the U.S. Supreme Court held that any conduct that consists of  ‘communicating a message’ is protected by the First Amendment. By limiting whom Bob is allowed to teach and what Esteban is allowed to learn, California has not only harmed the students most in need of an education but also violated their First Amendment rights.”

It’s important to understand, Smith says, that although this particular case involves horseshoeing, it’s not the focus.