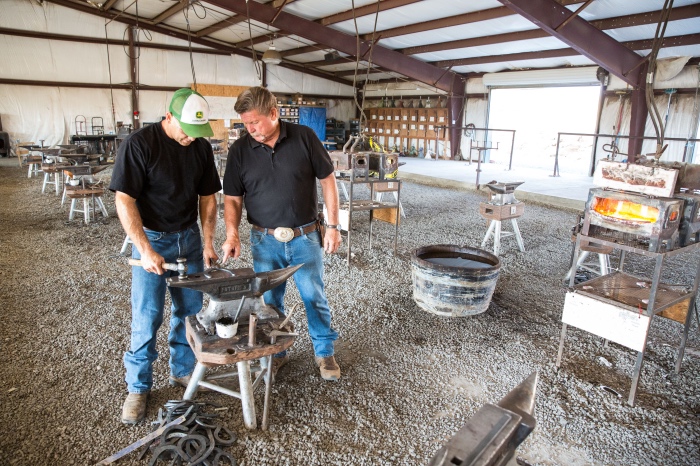 The state of California has repealed a 2009 law that required students without a high school diploma or an equivalent to complete an examination before enrolling in a private school. The repeal is due to a federal lawsuit filed by Bob Smith, right, who maintains that the law violates his First Amendment right to teach students at his Pacific Coast Horseshoeing School. Image: Institute for Justice

The white flag is flying over the Capitol of one of the most powerful states in the Union after a horseshoeing school provided a lesson in Constitutional freedoms.

The California Legislature enacted Senate Bill 607, which repeals a 2009 law that required students without a high school diploma or an equivalent to complete an examination before enrolling in a private school. It also repeals Education Code section 94811, which defined these students as “ability-to-benefit.”

“These changes will permit students without a high school diploma or the equivalent to enroll in private post-secondary institutions without having to complete the admissions prerequisite of passing an alternate entrance examination,” according to the California Bureau for Private Postsecondary Education (BPPE). “As a result of the changes, which will go into effect on Jan. 1, 2022, a student who is otherwise qualified and has a reasonable prospect of completing an instructional program, but lacks a high school diploma or the equivalent, will no longer have to pass an ‘ability-to-benefit’ examination in order to enroll in the program.”

The repeal was triggered after the Ninth Circuit Court of Appeals unanimously ruled that California likely violated Bob Smith’s constitutional rights by prohibiting him from teaching students how to shoe horses at Pacific Coast Horseshoeing School regardless of their academic status. Smith filed a federal lawsuit against the state of California in 2017.

“I was elated by the Ninth Circuit Court’s findings that teaching is not only covered by the First Amendment, but restrictions on that speech must meet the highest standards of strict scrutiny,” says Smith, a member of the International Horseshoeing Hall of Fame. “However, I wish we had gone to trial to obtain a more precise victory. By the state quietly dropping the ability-to-benefit requirements without a trial, it leaves the door open for them to legislate restrictions on enrollment in the future.”

The repeal of the law doesn’t necessarily end the 4-year legal battle, though.

In the meantime, the lawsuit remains active.

“We are waiting for the state to confirm whether it will fully repeal the regulations associated with the ability-to-benefit requirement,” he says. “The requirement imposes real burdens on real people, and it’s vital that it be eliminated in its entirety.”

Smith’s legal efforts have come under fire from some within the farrier industry with claims that his motives are nothing more than an attempt to boost enrollment and “dumb down” the profession. Smith maintains that it’s not the government’s place to establish educational requirements for farriery.

“Our trade organizations can have educational requirements, as they are private industry,” he says. “In a free society, each individual should have the right to try and succeed or try and fail, using their own money and their own time without government interference.”

Smith and Diggs are far from alone in their argument that the state government is overreaching. The case is being closely watched by constitutional scholars and law schools.

Eugene Volokh, the Gary T. Schwartz professor of law at the UCLA School of Law, filed an amicus brief supporting PCHS on behalf of himself and several UCLA professors. The brief argues that the law violates their First Amendment rights.

“For many vocations, including horseshoeing, a high school education and test-taking ability are not required for effective performance,” according to the brief. “Indeed, these are among the vocations that may often earn the best living for people without high school diplomas. And rough proxies for supposedly fraudulent speech that risk chilling free speech cannot pass the strict scrutiny required for content-based speech restrictions.”

California’s ability-to-benefit law prohibits educators such as Smith from teaching job skills to people who already have limited employment options, relegating them to an uncertain future.

Constitutional scholars and law schools agree, and now, so do the federal courts.