Home / Blogs / From The Desk Of AFJ / Is Copper A Fad Or Innovation?

Is Copper A Fad Or Innovation?

White line disease and other bacteria-related hoof ailments could wreak absolute havoc on an equine foot. As such, there are a number of products on the market claiming to remedy the problem with various degrees of success.

Among the more recent additions to the farrier supply shop shelves are copper alloy horseshoes and nails. As it is with most new products, the question is — are they innovation or fad? A bit of a history lesson is necessary to answer this question.

Copper has been used for medicinal purposes for several millennia. The Smith Papyrus, an Egyptian medical text written between 2600 and 2200 B.C., describes the practice of sterilizing chest wounds and drinking water by applying copper. Greeks, Romans, Aztecs and others also used the metal for treating headaches, burns, intestinal worms and ear infections, as well as for general hygienic purposes.

Pedacio Dioscorides Ana describes in De Materia Medica, a first century A.D. medical text, how to make verdigris. The process involves exposing metallic copper to boiling vinegar vapors, which produces blue-green copper acetate that forms on the metal’s surface. Verdigris and something with which farriers are well-acquainted  — copper sulfate — were used in remedies for eye ailments during this period.

As the modern era approached, awareness of copper’s medicinal properties became more heightened. It was observed during the mid 1800s cholera epidemics in Paris, France, that copper workers appeared to be immune to the malady. Its use only became more prevalent. Copper was used as an antimicrobial agent until antibiotics were introduced commercially in 1932.

Antibiotic resistant bacteria in facilities that were used for medical, food processing and animal breeding prompted the use of copper surfaces. However, in the past few decades, this practice fell out of favor until just recently. More than 150 facilities have resumed the use of antimicrobial copper alloy surfaces since 2011, according to the Copper Development Association (CDA).

“Antimicrobial copper is part of the solution in the fight against healthcare-acquired infections — it kills 99.9% of bacteria within 2 hours of exposure,” says Harold Michels, CDA senior vice president of technology and technical services. “Our goal is for health care administrators, infectious disease professionals, architects and other health care decision-makers to consider antimicrobial copper as a product that continuously kills bacterial contamination when they’re retrofitting or building new facilities.”

During a 2005 research project in India, English microbiologist Rob Reed noted that villagers stored water in brass vessels. Villagers told him the copper and zinc alloyed vessels protected them from waterborne illnesses such as diarrhea and dysentery.

“We discovered that when the water was contaminated with typical fecal bacteria, traditional [brass] containers were a lot safer, unlike earthenware and plastic pitchers,” Reed says. “After 48 hours, all the dangerous bacteria in the water were dead, whether we used sterile water deliberately infected with bacteria in our laboratory or local water from typical sources in [India].”

So how does copper kill bacteria? The International Copper Association has a much more detailed explanation, but The Wall Street Journal offers a concise version.

“Copper kills bacteria by draining electrons, which provide energy, and by pumping copper ions into the cell,” Stephanie Yang writes. “This destroys the cell membrane, DNA and proteins, causing the cell to die.”

The United States Environmental Protection Agency confirmed the efficacy of copper in early 2008 when it officially registered 275 copper alloys with positive properties to public health. Seven more alloys have been registered since. 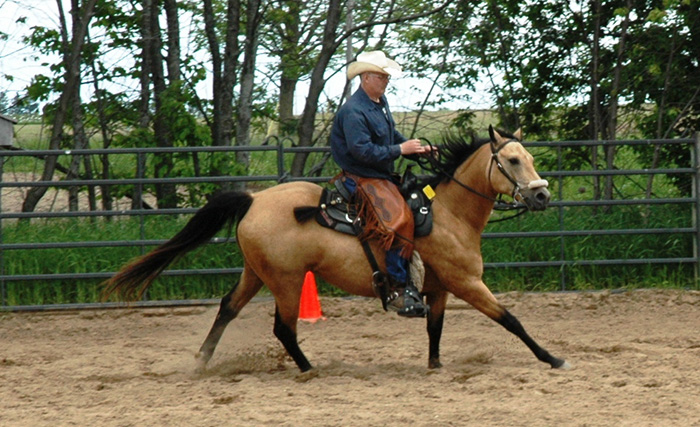 As alluded to previously, copper is no stranger to hoof care.

Farriers utilize copper sulfate crystals to kill bacteria in thrush cases that they face. Wellington, Fla., farrier Curtis Burns even mixes it with adhesives when repairing hoof wall to ward off bacteria.

“When you finish the foot, you’ll see a certain amount of blue flakes across the outside of the glue,” he told attendees at the 2016 International Hoof-Care Summit in Cincinnati, Ohio. “It’s just amazing the difference in the hoof quality. The first thing you’ll notice is the smell. When you take off most glue-on shoes, you’ll notice a certain rancid smell. It smells like a baby’s diaper has been sitting in the trash for a week. There’s none of that. It’s just truly amazing.”

Copper horseshoes produce a similar benefit when bacteria are prevalent.

“When you pull off the shoe, the hoof surface will have discoloration around the shoe,” explains Webster, N.Y., farrier Esco Buff. “That’s good. It’s just like the old roofs that had copper eaves and copper ridge plates. The copper would leach down the roof, preventing moss from growing because it was killing bacteria. This is how it works on the shoe.”

Green Bay, Wis., farrier Alan Folkman has been using copper on different horses — including his own horse Buckshot — for about 3 years. The 14-year-old horse had experienced white line disease for about 5 years. After seeing no progress using different chemicals, Folkman tried copper.

“I used copper on Buckshot’s front feet for about a year and a half,” he says. “Last fall, his feet looked the best they ever had.”

Folkman pulled the shoes for the winter, and admits he was a little lax on his hoof care.

“The junk in the toe and surface crack was back this spring, though not as bad as it was a few years ago,” he says. “The copper went back on in June. We’ll see how he does by this fall. I don’t have any scientific evidence that shoeing with copper works, but it’s working for me.”

While Folkman might not have the scientific data, the millennia of history back up his experience and suggest copper is more innovation than fad. So do Buckshot’s feet.

Have you used copper farrier products such as shoes, nails or pellets? Share your results and experiences in the comment section below.

How To Make Your Own Copper Shoes