Triple Crown Farrier Discusses When To Egg Out A Half Plate

By Jeff Cota posted on January 28, 2016 | Posted in Therapeutic Shoeing

It’s well documented that Arcadia, Calif., farrier Wes Champagne fashioned a half plate for the injured left front foot. Yet there were considerations that had to be made before its application. One of those involved whether to provide support for the limb by egging out the back of the plate.

“When the weight loads on the limb and the knee kind of hyper-extends when a horse is running, his ankle can almost sink into the ground,” Champagne told American Farriers Journal for its January/February issue. “They want to rock back, and the farther you get the support back underneath that hoof, the more you are going to support the back of that limb.”

It’s critical to watch the horse before egging out the plate, says the creator of the Blacksmith Buddy. If the horse overreaches, it could grab the plate with a hind leg. This is particularly a concern with sprinters because of the explosive nature at the start of a race. Champagne decided against egging out the plate for the Kentucky Derby because of the potential that traffic jams might result in the hind foot grabbing the plate.

Regardless of the type of shoe Champagne applies, he prefers to remove the temper from them with heat. The method makes the shoe more flexible so it can absorb more of the shock when the foot hits the ground. The Triple Crown farrier believes it helps reduce suspensory injuries.

Learn how to “Improve Your Success At Shoeing” by attending Champagne’s “How-To Clinic” at the International Hoof-Care Summit, which will take place from Tuesday, Feb. 2 to Friday, Feb. 5 in Cincinnati, Ohio. Learn more about the Summit program by visiting americanfarriers.com/2016program 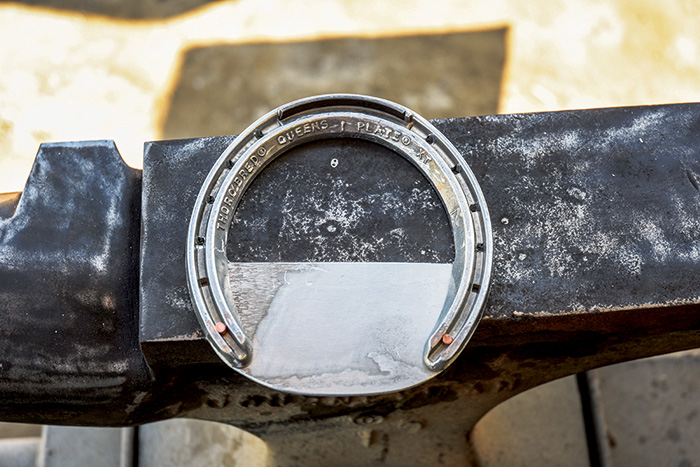 Arcadia, Calif., farrier Wes Champagne fashioned this half plate shoe to protect a bruise on American Pharoah’s left front foot during his run to the Triple Crown. Champagne will egg out a plate to help support the limb. He decided against using that method during the Kentucky Derby because of the potential of traffic jams increasing the likelihood that a hind foot could grab the plate.

Using half-rounds to deal with a toeing-in problem