Farriers Call On Their Colleagues To Be Prepared For Licensing

By Jeff Cota posted on November 20, 2015 | Posted in Business Practices

If you’ve been a Boy or a Girl Scout, both organizations employ a motto that serves as a good reminder and advice for any situation — be prepared.

“When we’re talking about licensing,” Kraus says with a smile, “there have been times when people have wanted to throw things at me. This is a very contentious subject.”

Although Kraus was lightening the mood with some good-natured fun to start the discussion, the discussion took on a more serious tone.

“I get to hear a lot of things that maybe some of you guys don’t,” he says. “There are initiatives out there. They are partially driven by Walt Taylor, former president of the American Farrier’s Association. He proposed them to not only farriers, but to many of the large breed and horse show organizations.”

It’s not a proposal that Taylor shrinks from. He’s shared his “Initiative to Professionalize the Practice of Footcare and Farriery” with a number of folks, including the American Horse Council’s (AHC) Health and Regulatory Committee.  You can read more about his initiative in December’s issue of American Farriers Journal.

A who’s who of the equine world were in attendance including members and representatives of the state horse councils, American Association of Equine Practitioners, American Quarter Horse Association, American Paint Horse Association, Back Country Horsemen of America, the United States Food and Drug Administration, Animal and Plant Health Inspection Service, as well as a multitude of equine breed organizations and animal welfare groups. 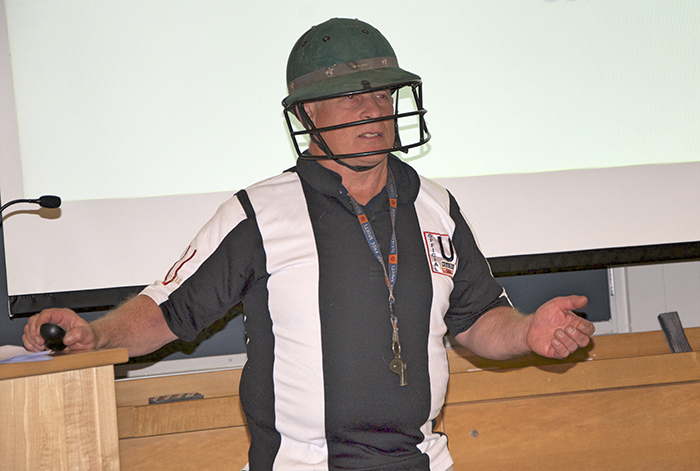 This begs the question — who would administer farrier licensing, should it come to pass?

“That’s a very big question,” Kraus says. “There’s no infrastructure for this. So where does it come from?”

That’s the proverbial $64,000 question — where does the infrastructure come from? According to an exclusive American Farriers Journal survey, 41% believe that the American Farrier’s Association (AFA) should lead the efforts to establish hoof-care quality and control standards. The American Association of Professional Farriers (AAPF) should take the reins, according to 19%. While another 19% believe it should be a collaboration of organizations leading the way.

“The biggest fear shouldn’t be whether we’re going to be licensed, but who’s going to be in control of it,” says Paul Heller, a Westchester County, N.Y., farrier. “I would rather have a farrier organization controlling it than someone else.”

The farrier organizations, though, are focusing on their well-established positions.

“The initiative that Mr. Taylor is promoting as an individual has been a source of division for the AFA as a group,” AFA President Tom DuBois wrote in The Professional Farrier, the organization’s official publication. “Consequently, since individual members hold differing opinions, and in the interest of the association as a whole, the focus of the American Farrier’s Association remains promotion and support of the AFA’s five foundational tenets and the AFA Mission Statement.”

For it’s part, the AAPF opposes licensing and will continue to focus on continuing education.

“It is the AAPF’s opinion that licensing is intended to control, whereas accreditation promotes and illustrates accomplishments and dedication,” according to its position statement.

Regardless of where they stand on farrier licensing, some of the attendees of the Cornell University Farrier Conference advocate one premise — be prepared.

“We’ve created more associations than I care to think about,” says Dick Fanguy, former AFA president. “Instead of uniting, we separate. You can’t solve a problem by walking away from it.”

That means banding together as an industry. Yet, that’s difficult to accomplish when there are so few who are participating.

“According to the U.S. Census, there are approximately 30,000 farriers in the United States,” Fanguy says. “I can tell you for a fact that the AFA only has 1,400 members.”

Another 600-plus belong to the AAPF, but there are some who hold dual memberships.

“That’s 2,000 out of 30,000 people who call themselves farriers,” Fanguy continues. “That’s the problem. We need participation in whichever organization you want to join. You’re going to get out of this what you put into it, and that’s the bottom line.”

If you want to control your profession, you must prepare for all eventualities.

“I don’t think it’s a question of whether there should be licensing, because I don’t think we have control of that,” Heller says. “The only way to have control is to organize ourselves so that we have a reining body that will control it if licensing happens.”

The consequences could be dire.

He points to the movement to criminalize horse-drawn carriages in New York City as a prime example.

“People who know nothing about the subject are going to be telling us that horseshoes hurt horses,” Kraus says. “These are things that should keep you up at night.”

“I can tell you,” Fanguy says, “there are bad times ahead if we don’t figure it out.”

Hall of Fame Farrier Calls on Colleagues to Lend a Hand