Home / Blogs / From The Desk Of AFJ / Forget About Hoof Color!

After California Chrome won the Kentucky Derby and Preakness, members of the general media jumped on the idea that the horse’s white hooves might be a detriment to his racing career. For many decades, some folks in the equine industry have maintained unpigmented hooves are more prone to cracking, tender footedness and weakness.

Reading the comments about California Chrome’s white hooves got me to take a look back at articles that have been published on the topic over the years in the pages of American Farriers Journal. In looking through the AFJ article index, I spotted several articles on the legitimacy of the claims about white hooves. 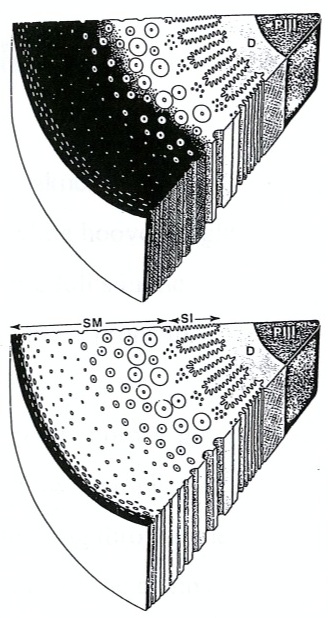 An article in the September 1981 issue by now deceased researcher Doug Leach pointed out that hoof color has been implicated as an important factor in the durability and strength of hooves as far back as John Dollar’s The Handbook of Horse-Shoeing in 1898. However, Leach reported that later research determined there is no difference in water content, chemical composition, hardness or compressive strength between white and black hooves.

Leach pointed out that only the outer 2/3 of the hoof wall contains pigment while the inner 1/3 adjacent to the lamellae is unpigmented. If there was a difference between these parts of the hoof wall, a shear force would be produced that would lead to a breakdown if the white hoof were weaker. And he said such breakdowns do not occur.

In an article appearing in the May/June 1993 issue of AFJ, Jamie Jackson agreed that the white-colored hoof has been a so-called concern in the horse world for more than a century. Now living in California, Jackson offered further evidence in regard to the controversy based on his own research with wild and free-roaming horses in the Great Basin area.

When it comes down to whether white hooves are inferior to black ones, Jackson pointed out that the notion that white hooves are prone to tender footedness and weakness did not hold up in the research he conducted with wild horses in the rugged outback. His observations were based on 500 hooves that he personally examined at the Bureau of Land Management holding centers.

When he placed these hooves into black (70%), mixed color (17%) and white (13%) categories, white hooves had the same measurement averages as the entire sample of horses. He found white hooves are as strong in the rugged outback as darker colored hooves.

Jackson concluded that pigmentation or a lack of pigmentation contributed nothing more than what can be deduced with the naked eye — hoof color and pattern. In fact, he determined that unpigmented horn could contribute to abrasion resistance, which is the opposite of what the industry has been led to believe for hundreds of years.

Jackson’s conclusion? The concern over white hooves is an old wives’ tale.

Besides the two AFJ articles, here are a couple of other references:

The Key to Soundness is in the Heels