Cliff Carroll Winds Down His “Enjoyable Adventure” in Farriery

Carroll is busy wrapping up his career by teaching the manufacturing ropes of his business to Well-Shod’s Timmy Snider and J.J. Armendariz. The Amarillo, Texas-based farrier supply shop recently reached an agreement to buy the manufacturing arm of Cliff Carroll’s Horseshoers Supplies, which sits just off of Interstate 25 between Denver and Colorado Springs.

“It’s probably time,” Carroll says. “I probably should have done it 10 years ago, but it just didn’t happen.”

As a long-time distributor of Carroll’s products, John Harshbarger has been an admirer of his work.

“We’ve always been interested in adding manufacturing products to Well-Shod,” says the owner supply shop. “Cliff has built a reputation on quality with really nice products. He might do things the hard way a little bit, but the extra steps that he takes on some things shine through in the end. It’s something that we wanted for our business and they are all made in the U.S.A., which is also important to us.”

During a conversation about supplies, Harshbarger tested the waters to gauge Carroll’s interest in selling his manufacturing business.

“I talked about it in passing with Cliff that if he was ready to retire, we might be interested in the business,” he recalls. “Then the day finally came.”

It arrived earlier this year when Harshbarger and Snider, who have been business partners for nearly 25 years, sold Rancher’s Supply feed store.

“We’ve known Cliff for a long time, buying his products over the last 20 years for the feed store, which Well-Shod grew out of,” Harshbarger says. “We let all of our vendors know what was going on. When I told Cliff that was happening, the timing was right and Cliff was ready to retire.”

Although Carroll and Harshbarger previously kicked around the idea, the latest conversation took the shoer by surprise.

“I didn’t think anything was coming of it,” Carroll says. “We got together and managed to work it out to where everybody was pleased.”

Snider and Armendariz made the trek to the Front Range of the Rocky Mountains in early July to familiarize themselves with the machinery and processes for manufacturing each of the products that Well-Shod is acquiring. They include four anvils, the Pro-Forge, Anvil Stump, Ruidoso Hoof Gauge, hoof stands, propane forge swing-out arms and several tools.

“That’s what we’re doing as we speak,” Carroll says. “We’ll do that for another month, then break down the machines and surface grinders. It’s not the stuff you can put on a regular truck. They have to be chained down on flatbeds.”

It’s not just training, though. The men are manufacturing products to bridge the gap between shipping the equipment from Colorado to the Texas Panhandle.

“They’re building products and sending trucks down with them, so hopefully we don’t have too big of an interruption in service,” Harshbarger says. “We don’t like backorders. They’ve built 100 Anvil Stumps. Now they’re shipping the stumps and the equipment used to make them after they’re done. We’re piecing them together as we go over the next couple of months. Hopefully, we’ll be in production in our shop on the first of September.”

While a deal has been made for Well-Shod to buy the manufacturing operations, Carroll’s supply shop remains — for now.

“I’ll see what I’m going to do with the supply business that I have,” he says. “I might sell that to someone locally because it’s more like a local business. We’ve always had a business here that sells shoes, nails — the things that every horseshoe supply store sells. I might even sell the real estate — my house and buildings. I don’t have much of a plan, to be honest. I’m just going to play it by ear.”

After graduating in 1967 from Bud Beaston’s Oklahoma Farrier’s College in Sperry, Okla., Carroll returned to his home in Canada and began his shoeing career. Something wasn’t quite right, though.

“I shod for a couple of years and realized that I didn’t know as much as I thought,” he says. “I had an idea that if you’re going to be a horseshoer, the goal should be to shoe the best horses, which in that era were Thoroughbred racehorses.”

His dream languished for a few years before an opportunity presented itself that Carroll couldn’t refuse. Bill Lawson, a prominent racetrack shoer in Toronto, Ontario, was looking for some help after his apprentice completed his 3-year term.

“I called him and asked him if it was true that he was looking for a new apprentice,” Carroll recalls. “He said, ‘Yep, if you want to come on up and see if we can get along. We’ll go from there.”

It was apparent to the young Carroll that this experience was exactly what he was looking for.

“I spent one day on the racetrack with that Scotchman and I realized that he could teach me exactly what I needed to learn,” he says. “I had been struggling on my own for 2 or 3 years thinking that one day I was a superstar and the next day I was the worst guy whoever swung a hammer. I was ready for something to happen and boy, it came right in front of me big time and I jumped at it. The experience completely set me on my path for the rest of my life.” 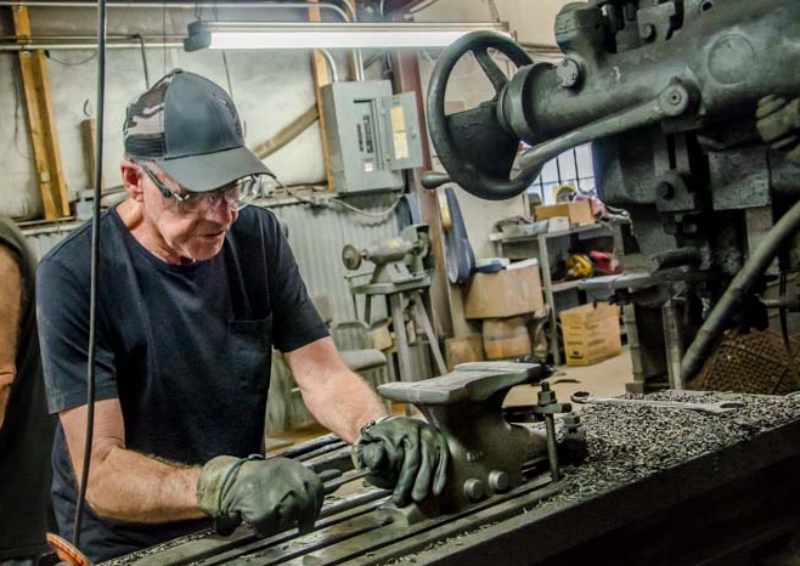 The opportunities to improve didn’t stop with Lawson. A trainer approached Lawson and Carroll with the hope of finding a farrier who was willing to shoe his stable of 50 2-year-old Thoroughbreds that were training in Florida for the winter. Lawson balked.

Carroll arranged to stay in Miami, not realizing that it would mean a long commute to Gulfstream Park.

“I wasn’t used to driving for an hour and a half before I shod my first horse,” he says. “I told them, ‘Geez, I don’t know if I want to do this. This is really an ordeal.”

The park trainers suggested hiring a small plane to shuttle him back and forth.

“That’s what we did,” Carroll says. “The pilot would buzz the barn when we would fly in so they’d know to send someone over to the dirt airstrip to pick me up. I’d fly in once a week and shoe 12 horses because there was 50-head and I had to shoe them every 30 days. It made everything work great. I did that all winter long, but April 1, I was back up in Canada at the racetrack until December.”

The next transition of Carroll’s life came when he opened a farrier supply shop in the early 1980s in Colorado. He shod local saddle horses while building his business. After successfully operating the shop for several years, Carroll explored tool making for the industry. He started by making a 2-pound Champion hammer and a 70-pound shoeing anvil.

“Things went from there,” Carroll says. “I kept adding to it and it grew to be much bigger than the supply business.”

So much so that the manufacturing consumed all of the time and effort that Carroll and his employees had.

“I’ve created a monster and I can’t tame it,” he says. “It’s been like that for a number of years. These guys at Well-Shod are half my age. I told them that if you can’t do what two older guys in their 70s have been doing, you have a problem.”

Yet, it was a labor of love that leaves Carroll with no regrets.

“When I first got going into all of this stuff, I was in my 30s,” he says. “Nothing was too hard and it didn’t matter if I had to do it day and night. You just had to do it until you were done. They say that you never work a day in your life if you’re doing what you love. Horseshoeing and manufacturing were like that. It wore you down sometimes, but not enough to stop or quit. It’s been an enjoyable adventure all the way through.”

[Video] Concepts Found Most Useful In His Shoeing Career