The 8 Best Things I Learned from Burney Chapman

I got to know Burney Chapman because I was a horseshoer in need of help and Burney helped everybody. We weren’t in business together; I was just in the right place at the right time. He was larger than life and worked unbelievably hard — he was a titan.

Burney grew up on a ranch and he had to shoe his own horses. He started shoeing with one hammer — a claw hammer — and a handful of Capewell city nails. He worked on a dude ranch in college, where he offered to trim a few broodmares, that’s how he started shoeing professionally. But he was passionate about it. He was inducted into the Brotherhood of Working Farriers and the International Horseshoeing Hall Of Fame.

At the 1983 American Farrier’s Association convention, he presented on a horse’s condition, completing a resection on stage and exemplifying amazing knowledge of anatomy, proving himself as an articulate teacher. The ’80s were the beginning of farriers speaking to larger audiences and he spoke to hundreds of farriers and veterinarians. That’s where I met him, in the hallway after his presentation. He was magnetic, so people surrounded him, and he took the time to help as many as he could.

Burney saw the world and learned a lot over the course of his career and he shared some of what he learned with me; he told stories and exemplified knowledge and professionalism — here is what he shared with me.

1. Honesty is crucial. Burney told me one of the first things he learned was that horse owners just wanted a farrier to show up. Better yet, show up on the day they were supposed to. He thought this was a problem in west Texas, but he learned it was a worldwide one.

Not only do farriers need to show up when they say they will, he also said they need to be realistic about what they can do — owners need to know that you can’t assess the horse until you see it. And once you see it, acknowledge your role in the situation. You are one part of the team: the owner, the vet and the farrier. Everyone needs to communicate and know what exactly is going on in order to effectively care for that horse.

Burney wouldn’t work on a horse unless its regular farrier was there. He said, “I’m only going to be here a short time. That man is going to take care of that horse the rest of his life and I want to help him increase what little knowledge I have to teach him.”

2. Be familiar with anatomy and stay educated. Burney studied an anatomy book like a veterinary student. He was inspired by one of his professors at Texas Tech, Dr. F.G. Harbaugh, who loved anatomy and used to draw the foot and its inner workings from every angle. Burney took up this practice. He said a shoer should touch a horse’s leg and be able to feel tendons they already know from paper.

He had his own early form of hoof mapping — though he would be impressed by how far it has come. He tried to shape a mirror image of the coronary band on both lame and sound horses. Then, he could understand where everything should be underneath. He paid attention to equal distances and took pride in them.

3. See inside the hoof. Before Burney, we all felt like experts, balancing feet and fitting shoes to the perimeter to the best of our knowledge. He said he started out working on feet without completely understanding where it was. He championed the use of X-rays, which was not common at the time. Now, if you are not experienced with X-rays and radiographs, you are behind.

4. Equine nutrition is essential. The ’80s were also the beginning of equine nutrition becoming a serious concern, farriers did not have much of an education with it at the time. Things have changed significantly since then. We know the key components to grow good hooves and hair, and that nutrition plays a key role in sole and hoof growth.

5. Farriers and veterinarians can share expertise with each other. Burney had a close relationship with Dr. George Platt. They were the first poster-worthy vet/farrier team that I knew of. On stages and at clinics they worked together as a team, sharing their expertise without crossing boundaries. Burney never told Dr. Platt how to treat a horse and Dr. Platt never told Burney how to shoe a horse — that was their agreement.

6. How to be a good teacher. He said that to be a good teacher, there are four things you must do: get the audience’s attention, understand the horse’s foot, learn as much as possible about how to teach and speak publicly and, above all, love what you do. Without that passion for what you are teaching, he said the other steps will not work.

People loved to be around his teaching because he had good ideas and he was excited about them. He taught those around him to do what he did — but he did not, could not, teach them to think like he thought. For that reason, the heart-bar shoe failed for some people. He remained unique.

7. The right way to travel. I was already traveling, and I was losing money. Burney told me to charge clients for travel expenses and travel time. He told me I was ignorant — which wasn’t a bad thing — and that I just didn’t know how to do it right yet. He gave me tips: that traveling is fun, you need to rest while you fly and getting the good car will pay for itself. 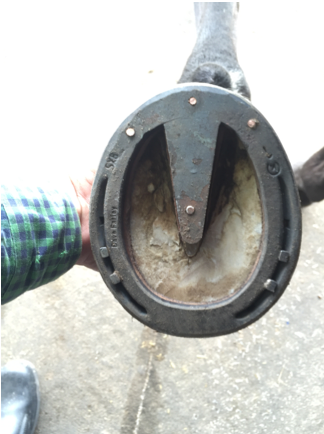 8. The heart-bar shoe. He gave us the heart bar shoe (reinvented it). It has many uses, including: unloading the wall with frog support, floating or unloading an area of the hoof wall and addressing heel pain — including pain in the navicular bone or bursa. It can also provide limb support, if used as an egg bar heart bar.

Heart-bar shoes can be made with varying amounts of support to the frog. Some horses cannot take much positive pressure, like the horse he and I shod in Columbus, Ohio. But if the shoe is made and applied correctly, weight placed on the horse’s frog rather than hoof wall is comfortable. Dave Farley is a farrier based in Coshocton, Ohio, and Wellington, Fla. He is a 2008 inductee of the International Horseshoeing Hall Of Fame.

Benefits of the Heart-Bar Shoe for Laminitic Horses: Part 2

Benefits of the Heart-Bar Shoe for Laminitic Horses: Part 3

Benefits of the Heart-Bar Shoe for Laminitic Horses: Part 1