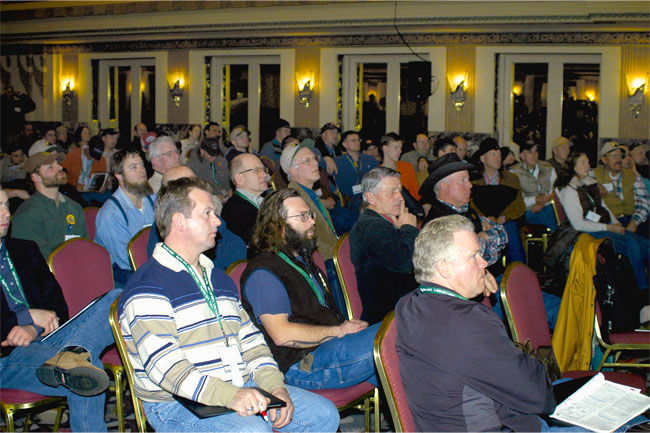 Attendees listen intently during one of the dozens of presentations from hoof-care professionals found at the IHCS.

Turn on any news station and they’ll subject you with endless coverage of failing economies worldwide. Ignoring this gloom and doom, hundreds of hoof-care professionals attended the 2009 International Hoof-Care Summit to further their footcare education and bolster their economic viability. Attendees came from every region of the United States and 19 foreign countries that included Spain, Norway, Israel and China.

The sixth annual IHCS, held in early February in Cincinnati, provided attendees with information-packed sessions, and the opportunity to share ideas with colleagues who represent every facet of the hoof-care community.

To attempt to summarize the 4-day event in a magazine only scratches the surface of the 76 hours of classrooms, general sessions and roundtable discussions found at the Summit. Through these and after-conference gatherings, attendees were able to compare notes with and learn from the leading farriers, equine veterinarians, and researchers from around the world.

For those who weren’t fortunate enough to attend this year’s IHCS in the Queen City, here is a sampling of what you missed.

A Wealth Of Knowledge

When you throw well over 100 years of combined shoeing experience on one stage, you can bet that these farriers have some thoughts on how to survive tough economic times. AFJ posed this subject to three Hall Of Famers: Mike DeLeonardo of Salinas, Calif., Red Renchin of Mequon, Wis., and Danny Ward or Martinsville, Va.