How To Evaluate Foal Limb Deformities

In most cases, it’s fairly easy to determine that a foal’s legs are crooked when observing the limbs while standing in front of the horse. Yet, that’s not the correct manner in which to examine it, Cornell University Equine Hospital veterinarian Norm Ducharme told attendees at the Cornell Farrier Conference in November.

“The first thing to do is not look at it from the front,” says Ducharme while displaying photos of a foal that’s toed-out. “From the front, you can tell the toes are facing outward (Figure 1). Now you want to decide, is this a valgus deformity or is this a rotational deformity? So, you move to the side and line yourself up with the foot (Figure 2).”

By doing this, you’re removing the rotational component.

The foal in the photos that Ducharme is presenting, though, doesn’t fit that description.

“When you look at the foal’s plumb line — or the mid-line of the cannon bone and the radius — there’s an angle,” he says. “This foal has a valgus deformity at the carpus.” 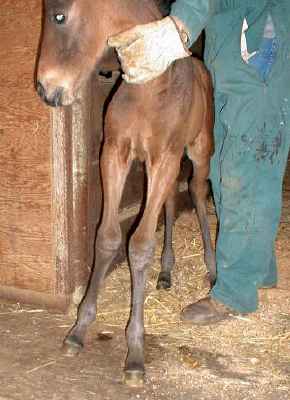 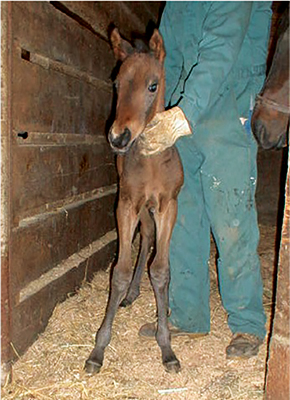 For more tips on evaluating and shoeing foal limb deformities, pick up the January/February issue of American Farriers Journal.

Do you have a helpful tip that could benefit other farriers? Send them to Jeff Cota at jcota@lessitermedia.com.

Protect Yourself By Evaluating A Horse Before Touching It