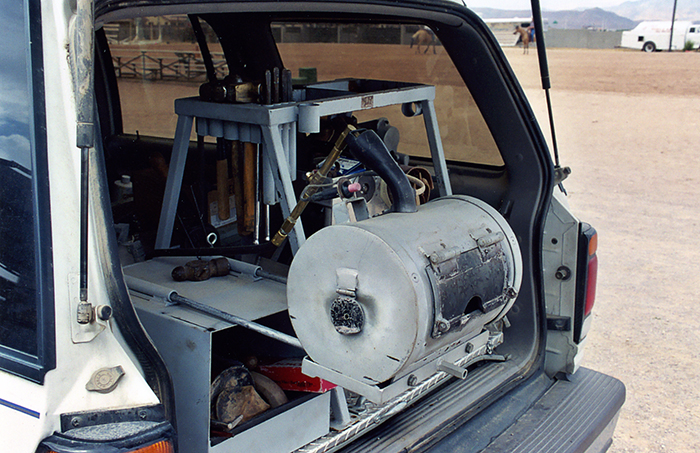 By Mike Podoll posted on May 1, 2006 | Posted in Business Practices, Forging

Mike Dawson of Las Vegas, Nev., has an unusual circular-shaped, slide-out forge mounted in the back of his shoeing rig. Dawson says its the best forge he’s ever used and gives all the credit to his sometime-shoeing-partner R.C. “Doc” Price, who designed and built it.

Dawson jokingly says that somewhere deep down inside Price lives a mad genius with an inventive engineering mind. Mad or not, the farrier and equine chiropractor definitely perks up when he talks about his forge design.

Price explains that about 15 to 20 years ago, he and his brother — who is a rocket scientist — were comparing notes on the sub-par performance of Price’s old square forge. The brother commented that gas works best in a circular environment, which led Price to start tinkering with various circular designs for forges.

“While I was working on my circular design, a new circular forge hit the market and I thought, ‘Damn, somebody beat me to my great idea,’” says Price. “But I needed a new forge anyway, so I kept working on the design. The forge Mike is working with is actually the prototype model for my forge. He’s my official product tester.”

Being the tester has worked out well for Dawson.

“This forge has taken an unbelievable amount of use and abuse,” he says. “In fact, I’ve had it for 5 years and it still has the original liner.”