By Pat Tearney posted on January 1, 2003 | Posted in Shoeing

Farriers constantly strive to balance a horse’s feet and bring its bony column into alignment. But what can they do when presented with an animal with legs so twisted and crooked that it appears they might corkscrew themselves into the ground as the animal walked?

Oswego, Ill., farrier Joe Trhlik has run into horses like that and says adding lateral extensions to the hooves can work wonders in some cases.

Trhlik, who does most of his work as a track farrier at Arlington Park and other racetracks near Chicago, also does some shoeing and footcare work at the Illinois Equine Hospital. He recently put lateral extensions on a miniature horse that had twisted legs, but says the same procedure applies to larger animals.

“On a crooked-legged horse, the most important thing is for the feet to land flat,” he explains. “I use the same procedure on miniature horses that I do on horses at the hospital that come in for surgery for leg angle deviations. I put on lateral extensions to keep legs straight while they heal after operations.”

BEFORE AND AFTER. Figures 1 and 2 are front and back views of the miniature horse before Joe Trhlik added the lateral extensions. Figures 3 and 4 are the same views after the extensions were added. Note the change in the angles of the legs. 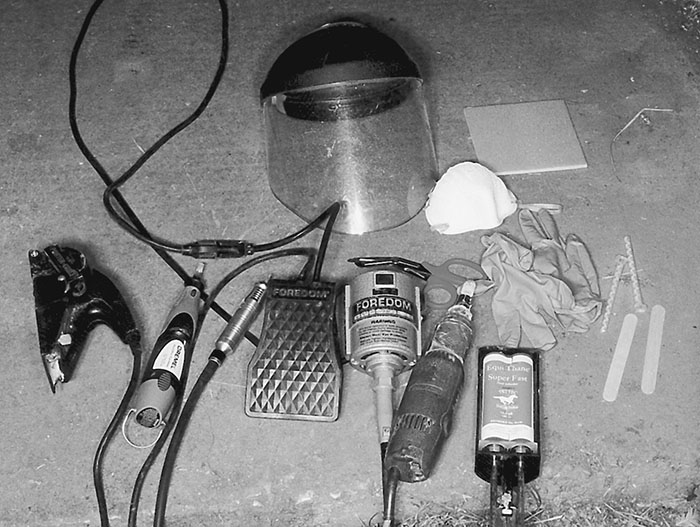 TOOLS FOR THE JOB. This is the tool kit Joe Trhlik uses for adding lateral extensions. He builds the extensions using Vettec…

Measurement Of The Hoof-Pastern Axis For Foot Management

Help For That Last Furlong

Onion Shoe: The Right Recipe For Many Problems