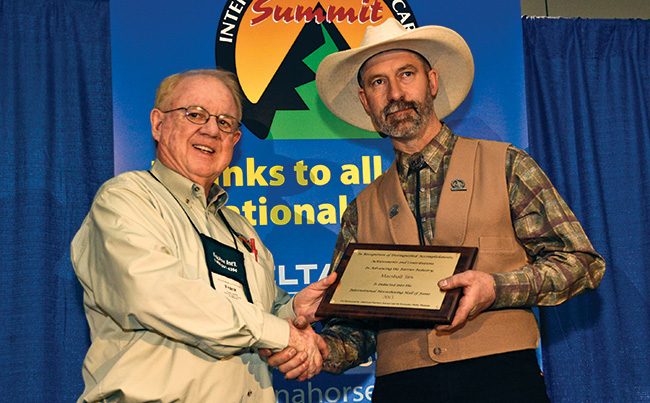 By Frank Lessiter posted on March 1, 2013 | Posted in Education

Honoring a dedication to their craft and a life-long achievement of high- quality work, the 2013 Hall Of Fame classes features five talented individuals

Marshal Iles has shod hunters and jumpers for more than 20 years and has played a key role in the success of the World Championship Blacksmiths’ Competition at the Calgary Stampede. He’s shown accepting the International Horseshoeing Hall Of Fame award from American Farriers Journal Editor/Publisher Frank Lessiter.

Honoring a dedication to their craft  and a life-long achievement of high- quality work, the 2013 Hall Of Fame classes features five talented individuals

The International Horseshoeing Hall Of Fame was established in 1993 to honor farriers around the world who have made significant contributions to the profession and who have left a permanent, positive impression on their peers and clients. American Farriers Journal and the Kentucky Derby Museum sponsor the program that attracted 85 farrier nominations this year, with 63 of the candidates receiving votes.

The qualifications of nominees for both Halls are evaluated by members, which include 121 farriers and 45 equine veterinarians.

Marshall Iles of Calgary, Alberta, has shod high-level hunters and jumpers for more than 20 years. A graduate of the Olds College advanced farrier science program in Olds, Alberta, and an American Farrier’s…