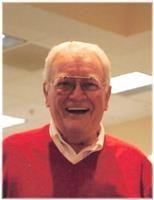 The family will not hold services.

Born in Arrowsmith, Ill., Swanstrom grew up working hard on his family farm, taking care of dairy cattle and show horses, as well as planting and harvesting many acres.

Among his early skills, he learned the art of shoeing and trimming horses from his brother-in-law Forrest Garrett. He also drove a black Clydesdale hitch based in Illinois, traveling to shows all over the Midwest.

After a friend encouraged him to go to veterinary school, he attended Eastern Illinois University, graduating in 1961 with his pre-vet degree.

He earned his Doctorate of Veterinary Medicine from the University of Illinois and was honored, in 1964, with an Illinois Racing Board scholarship. After graduation, he enlisted in the United States Air Force during Vietnam. He was commissioned a captain, and served as base veterinarian at Moody Air Force Base in Valdosta, Ga.

Following the Air Force, he attended Purdue University in 1969 for advanced study, earning his Master of Science degree in veterinary medicine, specializing in radiology and orthopedic surgery, while working as a graduate assistant and clinician.

After graduation, he was the field veterinarian at Illinois Equine Hospital and Clinic in Naperville, Ill. Within 2 years, he was teaching at Michigan State University’s Department of Large Animal Medicine and Surgery, educating students, farriers, clients and 4-H students in veterinary science classes.

From 1975-79, he had a private racetrack practice for the Chicago Thoroughbred race tracks. In 1977, he met Theresa, the love of his life, when he brought a horse into the clinic where she worked. They were married for 36 years.

In 1980, Swanstrom moved to Kentucky where he established a private practice, serving a number of Thoroughbred tracks and farms. He earned the nickname “ANYVET” at Churchill Downs because of his dedication.

He authored numerous publications on a variety of topics, including “Therapeutic Swimming,” which included producing the first video of equine underwater movement; “Clinical Effects of Intra-Articular Healon Injection” in the Journal of Equine Medicine and Surgery and “Intra-Articular Betasone and Depo-Medrol: A Comparative study.”

He was a member of many organizations, including the Kentucky Veterinary Medical Association, Honorable Order of the Kentucky Colonels, and the Who's Who in the Midwest.

He presented five American Association of Equine Practitioner papers and was a speaker at numerous Veterinary Medical Association conventions.

He was nominated and inducted into the International Veterinary Hall of Fame by an international group of veterinarians and farriers in 2005 at Churchill Downs. The award was sponsored by American Farriers Journal.

It didn’t matter whether the horse was a backyard pet or a million dollar winner, each of his patients was treated with the same level of respect and greatest degree of care. He showed up in the heat of the day or below zero night. He was devoted to his patients.

If he didn't know something, he would get on the phone and get answers. Swanstrom’s priority, focus and passion was never money, but always the love of the horse and getting them healthy and thriving.

He traveled the globe and was respected internationally by fellow veterinarians and farriers from Brazil, Sweden, France, Ireland, Japan and beyond. However, no matter where he went, Kentucky was always the most beautiful place to him and was his paradise.