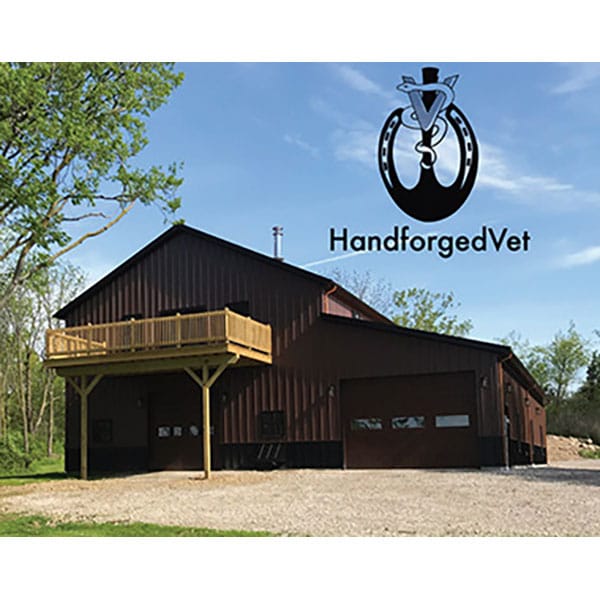 Ohio farrier-veterinarian Adam Pendleton celebrated a professional milestone when he hosted the grand opening of his expanded practice, HandforgedVet Equine Clinic, in Marblehead. The new 4,000 square-foot facility that Pendleton designed focuses on providing all of the services one might expect to find an in a state-of-the-art equine clinic, as well as creating an environment where hoof care professionals can come together to better serve horse clients.

“Encouraging dialogue that results in the best podiatry possible has been a dream of mine,” says Pendleton, who became a certified farrier when he was 15 and a certified journeyman farrier at 19. He established HandforgedVet in 2014 — a short year after graduating from the Ohio State University College of Veterinary Medicine. His goal has been to bridge the gap between veterinary medicine and farriery — and, as one of seven people in the world to hold both the CJF and veterinary credentials — he is uniquely positioned to do so.

“The clinic is the culmination of my mission to have the essentials necessary for a thorough look at a horse’s gait, feet and locomotion — but, most importantly, the space for horse owners, farriers, trainers and veterinarians to collaborate for the health of the horses.”

Pendleton approached his grand opening in late September with this thought in mind. He regarded it as an opportunity for horse owner clients and colleagues — both farrier and veterinarian — to come together not only to tour exam rooms and office spaces, but to exchange knowledge. In that spirit, Pendleton partnered with the Mid-Eastern Farriers Association to combine his two-day event with MEFA’s annual meeting and fundraiser. Pendleton offered case studies and general presentations, as well as demonstrations and hands-on workshops. The presentations took place in a dedicated learning space in the upper level of the clinic.

Pendleton was joined in the educational effort by Gertjan Korsman, who is the resident farrier at Lingehoeve Veterinary Clinic in the Netherlands — one of the leading diagnostic imaging centers in the world. In 2012, Pendleton spent a month apprenticing with Korsman, whose practice includes providing farrier services for some of the best dressage horses in the world.

“Even though he and I don’t agree on everything. I’ve always respected his work. I could see that he is very conservative on feet and he always had a thought process I could follow — whether it was following his work or following what procedures he was doing and why he was doing them,” Pendleton says.

Read about one of Adam Pendleton's approaches to support an acutely lame horse in the December issue of American Farriers Journal, "How to Make an Open Toe Heart-Bar Shoe." Recognizing The Significant Contributions Farriers Make To The Equine Community