Texas Farrier Supply #2 drew a large crowd to its Billy Crothers clinic in Weatherford, Texas, on the weekend of Sept. 22, 2018.

Despite working internationally and being a newlywed, the International Horseshoeing Hall Of Fame member and a five-time world champion blacksmith still takes time to teach others about the craft. The clinic drew a nice mixture of young farriers just starting out and those who’ve competed around the country. Crothers, the owner of Handmade Shoes in Pitstone, England,  worked with each one of them.

“I’m impressed by how open he is with the young guys,” former AFA president Dick Fanguy told American Farriers Journal. “And I’ve been around awhile so it takes a lot to impress me.”

Crothers helped out at least 50 participating farriers. He worked with them in shifts, and it was not unusual to see three fires working one anvil. Crothers saw tremendous progress with one novice farrier who was having some trouble pulling clips. After some guidance from Crothers, the young farrier was successfully pulling clips within half a day, says Fanguy.

There wasn’t much that Crothers didn’t cover. He met each farrier at their level of expertise, and he helped them in whatever area they were having difficulty in or wanted tips with.

“Billy told me he was having more fun than a barrel of monkeys,” Fanguy says. Crothers competes often, so the chance to teach was a nice break in the routine.

This free clinic was hosted by Chuck Milne, owner of Texas Farrier Supply #2, and Dick Fanguy.

The clinic wouldn’t have been possible without Milne’s commitment to farriers as well.

Other clinics can be pricey for young farriers just starting out, but Milne wanted this educational opportunity to be available to anyone.

And if it wasn’t for the heavy rain and flooding, more people would’ve been able to participate. However, for the 80 or so who braved the poor weather, it was well worth seeing Crothers in action.

Texas Farrier Supply #2 will be hosting another free clinic Dec 15-16 to honor the memories of Arizona farrier Pat Gallahan and Texas farrier Jack Miller. Gallahan passed away on May 23, 2018, after suffering a heart attack. He was 57. Miller, a member of the International Horseshoeing Hall Of Fame, passed away July 23, 2010, at the age of 70.

Danvers Child, Pat Broadus and Danny Terry will be the clinicians. In addition, an auction will be held with proceeds benefitting Gallahan’s wife. 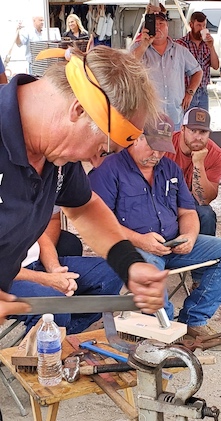 [Video] How To: Forging a Front Shoe with Billy Crothers

[Video] How To: Forging a Hind Shoe with Billy Crothers