By Linda Braus posted on May 12, 2018 | Posted in Disciplines & Breeds, Safety & Healthcare, Shoeing

Traction is among the most important considerations for farriers who shoe equine athletes.

During the 2018 International Hoof-Care Summit, Lexington, Ky., farrier Bobby Menker outlined ways to improve traction whether the horse is performing on synthetic, natural or hard footing.

Menker brought more than 35 years of his own shoeing experience to the lecture, but he also consulted other farriers, including Conrad Trow of Goshen, Ky., and International Horseshoeing Hall Of Fame members Bob Pethick of Califon, N.J., and Dave Farley of Coshocton, Ohio, for their expertise.

Synthetic footing is sticky and has hard bases. As a result, it allows for little to no slide, which is harder on soft tissue.

“We’re seeing more suspensory tears, collateral ligaments, things like that inside the foot are going on with soft tissue tears,” he says. “It’s also going on in the Thoroughbred industry, too; it’s not just the riding horse industry.”

There are a number of methods to combat traction problems on synthetics, but the first shoe that the group of farriers brought up to Menker was a Classic Roller or half round (Figure 1). The rolled edges provide give to the hooves.

“It’s a great shoe, breaks through the surface,” Menker says, noting that they can help older horses, as well as horses with angular limb deformities. “It just allows them to go and keep showing, it seems like.” 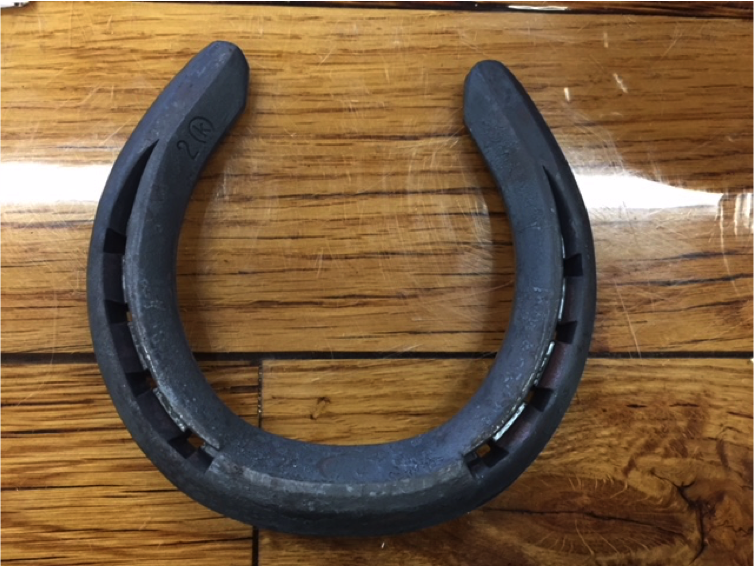 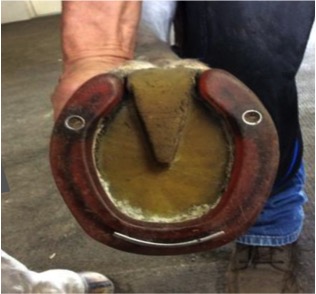 Similarly, the rockered toe shoe aims to make it so that “the toe is just not digging into the surface,” he says. “It’s hitting, has some type of little bit of relief.”

For hunter horses, Polyflex Horseshoes (Figure 2) are more forgiving than aluminum and becoming increasingly popular. Curtis Burns, the inventor of Polyflex, told Menker that owners like them because they don’t have to pull the shoe to go back in for the hack.

“What it costs them initially upfront is going to save them, particularly if it’s a big show horse that’s getting shoes tacked on it two or three times at a show per week,” he says. “They’re also using pour-in pads. Anything to protect the bottom of the foot a little bit, to help just give it a little bit of protection — whether it’s leather pads or V-pads. We like to use V-pads a lot, especially if the frog’s got any problems going on with it or we feel they’re a little sore on it, we’ll use the V-pads. Some people put Equi-Pak underneath the V-pads, or you can just soak it and let it set up against the foot.”

Specific shoes aside, the farriers who Menker consulted prefer a narrow shoe.

“You hear some of the theories that some guys are talking about, they want the wider shoe, but these guys are not,” he says. “They want something that will break through that surface and get down to it a little bit.”

Riders may also opt to use studs for supplemental traction.

“Most of the time, it will just be two studs, and most of the time you’ll see the riders put the small ones in on jumpers,” Menker says. “We don’t supply studs. They all have their own kits. We don’t make those choices, we just put holes in the shoes.”

For larger horses and Grand Prix horses, this means three stud holes in the hinds.

Meanwhile, some barefoot horses have also won races on synthetics.

“They felt they held onto the turf or the track better barefoot than they did before,” he says. “But a lot of them would pop them [the shoes] off, race them, and then go back and put them back on.”

For natural footing — sand, grass, clay, limestone — traction considerations need to be made for the weather.

“Like up at Spruce Meadows, it gets really wet and boggy up there,” Menker says. “Or down here in Kentucky in the summer on the ones we’re showing out on the cross-country course stuff, it gets really hard. So that rider has to take all that into consideration when they’re going for traction devices, and how that is going to affect them.”

Different classes of horses and sports present their own challenges.

“Most of the barrel pens or stuff like that are still running on natural surface, clay/sand mixtures, things like that,” he says.

Both the depth of the surface and the discipline are contributing factors.

“Rodeo horses are some of the hardest ones to do it for because they’re running on something different all the time,” Menker explains. “They might be running on a racetrack one day and then at a permanent arena the next day.”

Menker consulted Versailles, Ky., farrier Steve Stanley about shoeing Standardbreds, who recommended full swedges for traction on limestone tracks. He also uses Borium along the rim and in dots to help horses on the Standardbred track.

“There are actually some Standardbreds that race in polo plates (Figure 3),” he says. “Barrel horses use them too. You have that breakover out there still, but you have the rim for stopping, running and for added traction.” 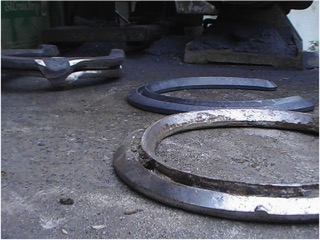 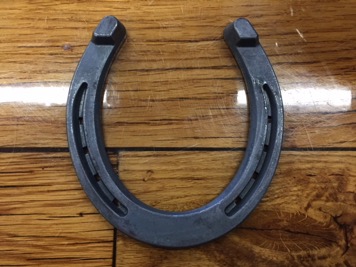 Aluminum shoes may also be a good choice for traction, depending on the rider.

“For the majority, this is all the traction we need,” he says. “You’ll see a lot of barrel horses running with just keg shoes.”

“They’re not allowed to use blocks anymore, but they do use turndowns,” Menker says, “but they can only be a quarter of an inch high.”

For supplemental traction, pins on the front and driving studs on the hind can benefit any horse that is going to be on hard surfaces for short periods, he says. 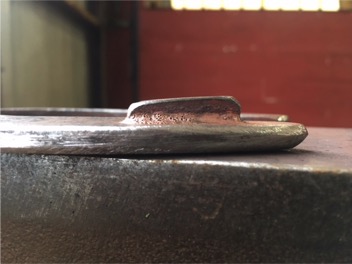 Menker also has used jar caulks (Figures 5a and 5b) in rim shoes when the ground is bad to help the horse slide while also being able to grab going around the turns.

While Menker doesn’t personally shoe a lot of horses that are consistently on hard surfaces such as asphalt and concrete, he says that drive-in studs can also be used for them.

“Years ago, I shod at the University of Findlay. When they put concrete in the barn, it wore out and was very slick, and horses were falling down left and right,” he recalls. “So we were putting the driving studs in all the time and got along pretty good with it, but it’s just a major pain when you’ve got that many horses to deal with.”

V-Trak nails, which have carbide welded onto the nails, can be used for winter if horses are going to need to cross roads and frozen ground.