By Jeff Cota posted on February 12, 2016 | Posted in Business Practices 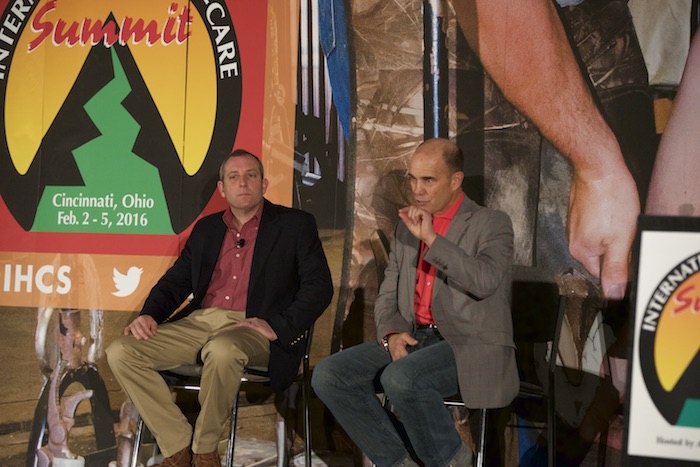 Rancho Santa Fe, Calif., farrier and equine vet Mark Silverman, right, emphasizes the goals that he wants to accomplish with a horse when working with a farrier. He prefers that the farrier determine the manner in which he or she is most comfortable to achieve the goal. Silverman and University of Pennsylvania head farrier Pat Reilly teamed to discuss, “Destroying Roadblocks That Hamper The Veterinarian-Farrier Relationship,” at the 2016 International Hoof-Care Summit.

It happens, and it’s usually uncomfortable. Motivational speaker Tony Robbins once said, “To effectively communicate, we must realize that we are all different in the way we perceive the world and use this understanding as a guide to our communication with others.”

That’s what makes the farrier-veterinarian relationship tricky. What very well could be a genuine attempt to be helpful by either party might be construed as something altogether different.

It’s a topic that California farrier and equine vet Mark Silverman and Pat Reilly, chief of farrier services at the University of Pennsylvania, tackled head on at last week’s International Hoof-Care Summit in Cincinnati, Ohio.

“One of the things that has always offended me, as a farrier, is when a vet will say, ‘Put a size 2 Natural Balance shoe on,’” Reilly told attendees of the joint discussion, “Destroying Roadblocks That Hamper The Veterinarian-Farrier Relationship.” “Any time someone starts to pick a brand of shoe that they want me to apply, the hair on the back of my neck starts to stand up a little. I find that to be somewhat insulting.”

It’s fairly safe to say that most farriers and vets would share the same reaction. But, the true intention might be clouded.

“I brought this up with some of the vets I work with and they said, ‘That’s funny, we’re certainly not trying to,” Reilly recalls. “‘We’re just trying to explain an effect.’ They would like to see the breakover point moved back.

“Honestly, because they have such limited information and education, I think a lot of vets really are not knowledgeable enough to really discern between a square toe, round toe, rolled toe or set back shoe. I don’t think they necessarily have a way of articulating it. So, while my natural response is to be offended, I’m not sure that they are intending offense.”

It goes both ways, though.

“I called one of the anesthesiologists the other day and I asked for some sedation,” Reilly says. “She asked what I needed. Now, the correct answer would have been, I need 45 minutes for a 1,400-pound warmblood. Instead, I said, ‘I need 4 milligrams of detomidine,’ because I know what the horse had been sedated with last time. I’m still taking a lot of abuse for that.

“I didn’t intend to offend her, but in trying to tell her what I needed, I was telling her how to do her job — and I offended her. I think farriers and vets have to be careful of that and we need to understand that wasn’t necessarily the intent. When you talk directly, a lot of those problems go away.”

Silverman, from the vet point of view, suggests his colleagues discuss outcome goals rather than specific trimming and shoeing protocols.

“For me to tell farriers exactly what to put on the foot is ridiculous,” says the owner of Sporthorse Veterinary Services in Rancho Santa Fe, Calif. “After I have established some diagnostic findings and a direction that I would like to go in, I’m going to say to the farrier, ‘The horse has this going on.’ I’ll share the X-rays and I’ll go over the information that I have so far. I’ll say, ‘I’d like to aim in this direction. We need to change something about the unrollment of the foot or the medial-lateral balance. What do you think this horse can handle? What would be appropriate for this horse’s foot?’”

This approach allows farriers to rely on their expertise.

“We should always talk about direction and the effect we are trying to achieve, because each farrier is going to have a tool that he or she is more comfortable with,” Silverman says. “There are 100 ways of achieving any one effect. It’s a better direction when I say, ‘I’m trying to achieve this change.’”

If either party disagrees with the approach, Silverman suggests taking the discussion away from the client.

“There’s always a way of saying, ‘I see where he or she was going on this, but let’s try a different direction,’” he says. “That’s a nice way of doing it. I’m not going to put down a farrier’s work in front of the client. You don’t ever need to use someone else for traction to prove how good you are. That’s just poor business and stupid, quite frankly.”

If the disagreement can’t be resolved and you believe the approach will be detrimental to the horse, both Reilly and Silverman advise walking away.

“I don’t think a veterinarian’s prescription absolves us,” Reilly says. “I’m still responsible for the choices I make. There are times when I’ve had to step away.”

It can be an uncomfortable situation, but it’s also a professional way of doing business.

“Walking away is certainly an option,” Silverman says. “You can graciously say, ‘I really can’t get behind what you’re prescribing. I can’t go forward with this.’ It would be extremely awkward, I understand. But, it’s better than putting yourself in a position of doing something you really don’t believe in.”

What makes your relationship with a vet or farrier work? Please share your tips and advice below in the comments section.