You Don't Have to Go it Alone

Horse owners and trainers expect you to be the hoof-care expert, but a real expert also knows when to ask for some help

J.D. Downs has been shoeing full time since 2006 and has built a pretty successful practice near his Frederick, Colo., home. If he has one particular piece of advice for young shoers, it’s “Don’t get in over your head.”

Back in early June, I spent a day with Downs. His first scheduled horse was a mare he’d never shod before. She was a hunter that the trainer — a regular client — had asked him to look at. The trainer had warned him the mare had some “navicular issues.”

Some farriers and veterinarians say “navicular issues” is hoof-care speak for “We don’t really know what’s wrong.” It’s the kind of situation where farriers — especially novices — can easily get in over their heads.

But Downs decided not to tackle this one on his own. He called in one of his mentors, Neal Miller.

Downs apprenticed with Miller, a 35-year veteran from Brighton, Colo., and still works with him one day a week.

Downs had been told the horse had been moving well when shod with steel bar shoes and pads. But when a change was made to open-heeled aluminum shoes, she wasn’t moving as well. And the trainer preferred sticking with aluminum for less weight.

Miller and Downs evaluated the horse together. They agreed she was back on her heels a bit, and decided to do her fronts with aluminum bars shoes fitted with 2 degree bar wedge pads.

Downs trimmed the feet, while Miller drilled the shoes and cut and tacked on the pads. Once the horse was finished, they both went on with their separate shoeing days.

Now this wasn’t exactly a groundbreaking consultation. It was more a matter of Miller concurring with a shoeing approach that Downs was already leaning toward. What I found interesting about it was Downs didn’t make the mistake of thinking he was on his own. So long as there was any doubt in his mind, he saw a value in bringing in a second set of eyes.

It just makes sense to keep your mentors close. That’s what will be best for the horse and, ultimately, for your hoof-care business. 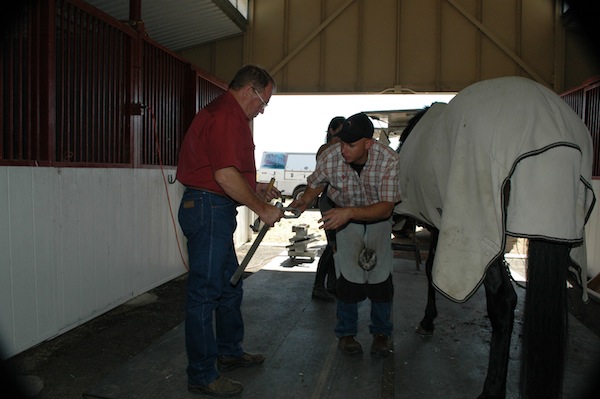 Neal Miller hands J.D. Downs an
aluminum bar shoe to check its fit for a hunter.

The day I spent with J.D. Downs will be the subject of a “Shoeing For A Living” piece in an upcoming issue of American Farriers Journal.

[Video] Attending Horse Shows As A Learning Experience, Even When You Don't Shoe

Working Alone Vs. As Part Of A Team