By Frank Lessiter posted on May 9, 2013 | Posted in Disciplines & Breeds, Shoeing

Earlier this week, I returned to our Wisconsin offices after spending 10 days in Northwestern Colorado taking photos of horses during an Equine Photographers Network workshop.

Our group of 20 photographers spent a number of days photographing working horses on the Sombrero Ranch, 10 miles west of Craig, Colo. Then we wrapped up the workshop as part of the Great American Horse Drive that the Rex Walker family conducts each spring.

For more than 50 years, the ranch has moved hundreds of horses over 2 days that winter on Bureau of Land Management land near Brown's Park to the Craig ranch. This year’s drive included 600 horses that will spend the summer and fall rented out to dude ranches, scout camps, backyard horse owners and at a half-dozen summer horse rental stables the ranch operates in several national and state parks.

Following these summer rentals, the horses are returned to one of the Rex Walker family's ranches and many are then rented out to hunting camps from Oct. 1 until the state's hunting seasons wrap up in mid-December.

Our group photographed the herd and wranglers from the back of five pickup trucks during the 62-mile drive along back roads and U.S. 40 from gathering pens located 30 miles northwest of Maybell, Colo.

From a 1958 beginning with 16 horses, this has turned into the largest stable horse operation in North America and is headquartered near Longmont, Colo. Over the past 55 years, the Walker family has expanded the operation to several ranching operations and ownership of thousands of horses. 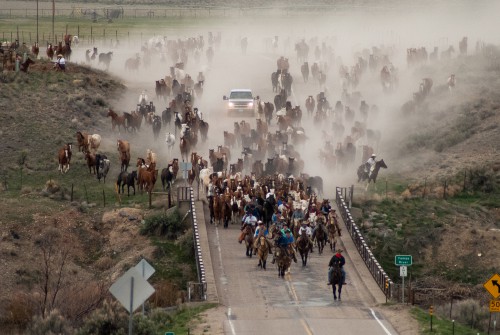 600 horses on an early May 62-mile long Colorado horse drive funnel into
bridge to cross a river.

This spring's shoeing work went fast with the 600 horses as 10 farriers tackle the work and normally trim and shoe 60 to 80 horses per day. The ranch employs several wranglers with shoeing experience and also bring in outside farriers to work with the horses at several locations. The ranch hands include farriers who have attended horseshoeing schools in Oklahoma and Montana.

Be sure to watch for the July/August issue of American Farriers Journal, which will feature the podiatry work that goes with this ranching and horse rental operation. You'll also gain some valuable shoeing ideas to use with these kinds of horses from a highly successful a New England farrier who specializes in working with high level hunters and jumpers that makes occasional visits to this operation.

Plenty to Do with 600 Horses to Shoe

More Soring Changes in 40 Days Than in Last 40 Years