Farriery Doesn’t Have to be a Tug of War

By Danvers Child, CJF posted on February 29, 2020 | Posted in Education 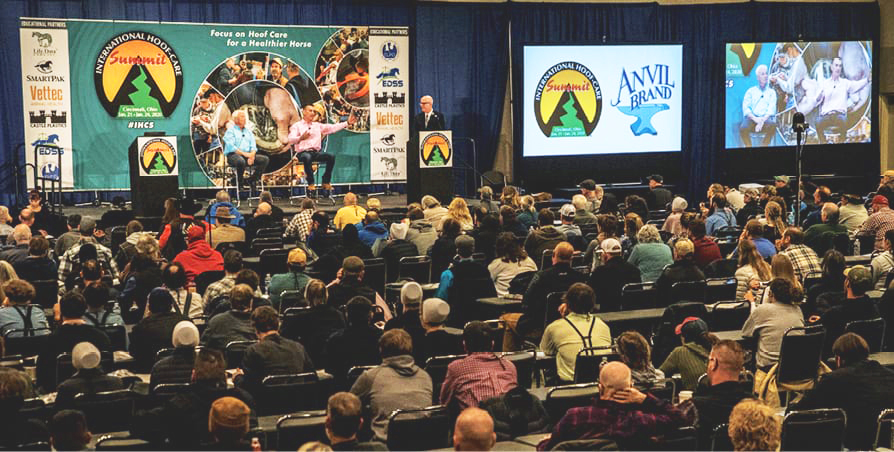 You can’t continue something without looking at where it started and looking at foundations. So maybe, just maybe, you’re not really pursuing continuing education, maybe you’re just pursuing your passion. That’s what I did. That’s how I ended up at the Summit. I was passionate about helping horses, shoeing horses, working with horses, and maybe it wasn’t really continuing education that was motivating me, but it was passion-driven education.

So, did you go to the lectures that focused on the things that you already believed in? That’s what I did for years. I listened to people who reinforced what I thought, and I patted myself on the back and I said, “Gee, he agrees with me.” So, did you come with blinders and reinforce what you already believe? Or did you listen to things and challenge your beliefs and try to gain new perspectives? We tend to approach this with Maslow-Zimmer — the idea that if all you have is a hammer, everything’s a nail. Or if all you have is a screwdriver, everything needs a chisel.

The idea is that we tend to corner ourselves and move into factions and fractions. Several years ago, I made this little pie chart — the fractional farrier. You divide pies up and you keep dividing it and you keep dividing it, and instead of having pieces, you end up with crumbs. I looked around in Cincinnati and I saw people wearing American Farrier’s Association (AFA) jackets. I saw people wearing American Association of Equine Practitioners (AAEP) shirts and Equine Lameness Prevention Organization (ELPO) hats and so on. I think that’s wonderful and we all need to associate ourselves. That’s what associations do. They pull people together who are like-minded and who have common goals and missions and ideas and it’s a wonderful thing. But at some point, we associate so closely that we separate ourselves and compartmentalize ourselves and move away from gaining new perspectives.

I play around on the internet a little bit and have a Facebook page or two. I get to see your opinions. One of the things that I see over and over again are people looking down at platers and long-footers. It amazes me. Back in the early 1900s when the industrial revolution was rising, mechanization was the thing, and blacksmith shops were becoming gas stations and tire stores. Our trade was dying. The horse was no longer necessary. So, blacksmith shops were closing right and left.

Now wait a second, back when the horse was an important thing, all of these guys had gone through a 4-year apprenticeship, but they needed to get these people trained for the European theater. So, they created a 6-week course. They went over and worked on these horses and they did beautiful things.

When they came back, mechanization was kicking into full swing. Lots of cars, planes, all kinds of things. We were dead in the water again. Nobody was shoeing horses. People were shoeing their horses because the animals were just not a big thing anymore.

So, where were horses being shod? Where were the people learning how to shoe horses?

Racetracks, that’s about it. You had a small contingent of long-footers working on the show horses. But show horses? There weren’t many shows then. So, you had platers and they were the ones who preserved those skills that came from those long apprenticeships and in fact from the journeymen horseshoers union and the testing that occurred.

Then along came World War II. Again, wow, we didn’t have enough equipment, enough mechanization to drive the war. We returned to Europe and we fought the war with horses again. They weren’t as primary to the effort, but they were a huge secondary element.

And again, that 6-week curriculum was given to take care of the horses that were fighting the war. When we came back, again, there was no need for farriers. In the late ’50s and early ’60s, the economy was strong and we started watching shows. We started seeing a recreational market and people were buying their Airstreams. They had their little Miley Quarter Horse trailers that looked like you’d put a sheep in it. They would go to their weekend show, they would rodeo and do various things. There was kind of a need for horseshoers, but nobody knew how to do it.

The AFA was rising. Who was starting the group? It was platers and long-footers, the very people who we look down upon and laugh at now. And yet, they’re the skill base that we’re trying to build on.

I went to the track after I got out of school and I failed miserably. I said, “This is ridiculous. This is horrible.” I made fun of it and I laughed at it. I struggled for 20 years shoeing other kinds of horses and I finally got established and started doing OK for myself.

It Doesn’t Have to be a Tug of War

You went to the International Hoof-Care Summit for continuing education, but what were you continuing? Did you attempt to broaden your education? I’ve broadened my education by going back and working in something that I used to think was horrible and now it’s cool.

So, hopefully, you met a mentor in Cincinnati. All the classrooms, all the workshops are wonderful things, but when it comes right down to it, the people you met are going to drive your continuing education. I can’t tell you enough how much you benefitted from the people you met here. I went to a little dinner last night and we started calculating the number of years of experience at my table — 311 years. In the room, and it was a fairly small room, there were 1,789 years of experience.

We all talk about how we could spend another lifetime or two trying to figure out horseshoeing. Well, you don’t have that other lifetime. You don’t have two or three more lifetimes. But you do have a network of people that when combined, we have those lifetimes — as long as we network and we share. A life-long horseman and a practicing farrier since 1972, Danvers Child specializes in shoeing sport and performance horses. The Lafayette, Ind., farrier was elected to the International Horseshoeing Hall of Fame in 2018.

I have several horses on bute for pain control. Are there any side effects I need to be aware of in regard to other health issues?

What may be the causes when biotin doesn’t seem to work?

I have a 21-year-old Appaloosa mare who recently came down with a case of grass founder. I’m giving her 1-ounce of bute along with one-half cup of grain. Is this amount enough to relieve any pain? What do you recommend?