Be Ready to Think Outside the Box

Pictured Above: Dave Giza uses a WaterPik he purchased at Walmart to treat a maggot infestation in Achilles' foot. Photos: Dave Giza

Every now and then, farriers have to think outside the box when confronting multiple problems to restore the health of a horse's foot.

Achilles was one of those horses that challenged farrier Dave Giza to be creative with hoof-care solutions. He had to meet unusual challenges with a unique support team, creative use of tools and new methods to reach a good end result. He was asked to take on Achilles, a Belgian that was sponsored by Coast To Coast Draft Horse Connection, as a special case. "Achilles" was an appropriate name for this horse since the problems with his feet were extensive.

The entire time Giza was working with Achilles, he had a team of vets and equine health professionals supporting him. West Chester, Pa., equine veterinarian Frank Reilly was the surgical consultant and Dr. Frank Gravlee from Life Data Labs was the nutritional vet who worked with the case. Giza spoke with Mike Barker from Life Data Labs almost every week as well. He also had access to the Warrenton Regional Animal Health Lab, a Virginia state lab, where he was able to take hoof samples and have them run biopsies on them. He also regularly worked with his personal vet, Dr. Ann-Marie Hancock from True North Equine.

Throughout this process, Giza needed to use medications for sedation and topical treatments. To sedate Achilles, Giza's vet used a Dormosedan-Torbugesic cocktail. Doxycycline was administered orally to Achilles. The topical medication Giza used on the damaged parts of the hoof was a canker powder provided by Dr. Frank Reilly.

The paddock in which Achilles was kept featured a floor covered in stone dust, which helped keep his feet dry. Food and water were placed on opposite ends of the paddock to encourage exercise, something that is far too often overlooked but is an absolutely integral component of recuperative care.

When Giza began working with Achilles, the horse's feet were in terrible shape. All four hooves were overgrown and caked in filth. He couldn't walk because an overgrowth on his left front hoof would cut into his right leg every time he tried to take a step. He also had a bulbous overgrowth on his right hind foot, which was probably caused by an accident with a farming implement. His left hind foot was actually in decent shape compared to the others.

Giza worked with Dr. James Holt from Brandywine Equine to stabilize Achilles before he could be transported. Because this horse's feet were so damaged, trimming his hooves was difficult. Giza did what he knew would help him get Achilles' feet back in decent shape: he trimmed to landmarks. Finding them was difficult at first, so Giza started by whittling away the debris and excess hoof. He also used a Sawzall to get the overgrowth off of the left front hoof, and then was able to remove all the impacted sole and expose the frogs of the feet. Giza trimmed the depth down to the level plantar surface with nippers and nipped to the white line circumference, then finished with top dressing.

Giza discovered a few things during the initial trim that would prove to be issues in the coming weeks. The frog in Achilles' left hind foot was infected. There was necrotic tissue in both his left front and right hind hooves, which were also infested with maggots. Topical powders would prove to be of no use since the maggots had worked their way far up the hoof wall. It was at this point that Giza had to think outside the box in order to develop effective treatments for Achilles. 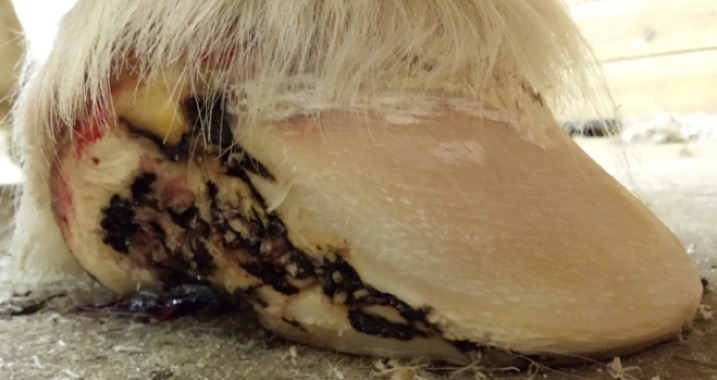 The maggot infestation in Achilles' hoof.

Since the maggots were a consistent problem, Giza used nontraditional tools to get rid of them. The infestation in the left front foot was in a concentrated area, so Giza used a water pick he bought from Walmart and a 50/50 mixture of water and Listerine to flush the hoof. Giza then fit a size 7 Open Bottom Rocker Easy's Slipper on Achilles' left front hoof since a good portion of his medial side was missing. The gap was filled with Vettec Equi-Pak CS. 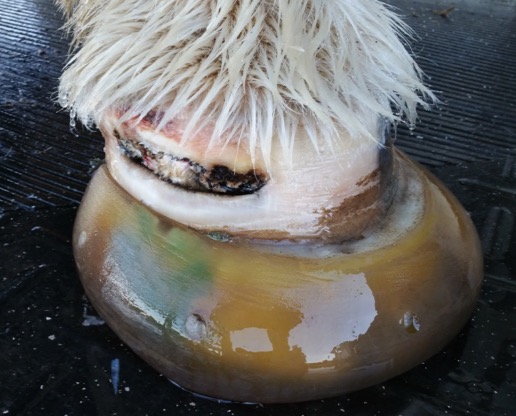 To treat Achilles' right hind foot, Giza built a makeshift foot Jacuzzi out of a garbage can. He connected an air pump to the bottom with an air hose and placed a grate from Lowe's inside the can on a 2x4. Air was directed toward the plantar surface by a 90-degree copper pipe inside the garbage can that pulsated the water and Listerine mixture. 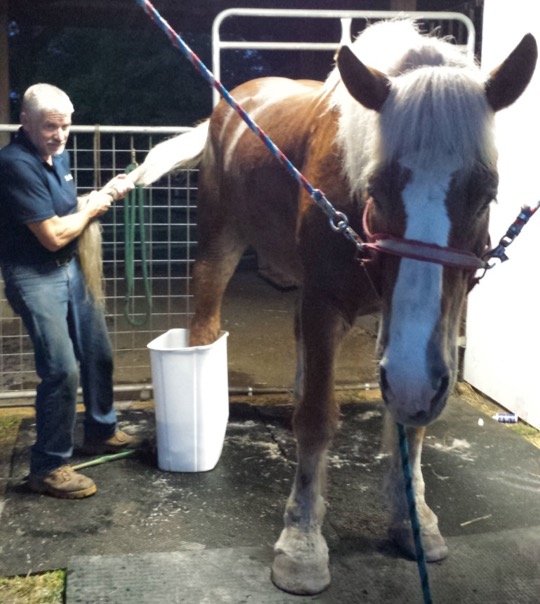 Giza will rarely use a prosthetic shoe to completely cover a horse's hoof because he knows that the hoof is still susceptible to bacteria that can cause an infection. A horse's foot might appear to be perfectly clean, but it can still be affected by anaerobic bacteria. Unfortunately, this is what happened to Achilles. He abscessed about 2 weeks after Giza started treating him.

The abscess blew out at the coronary band. Fortunately, Giza was able to send a sample to the Warrenton Regional Animal Health Lab. After they examined the sample, the lab reported that Achilles had equine proliferative pododermatitis or, in other words, canker.

Giza used a topical powder from Reilly to treat the abscess. Giza also used his experience from a canker case he and Reilly worked on together several years prior. Reilly taught Giza an important rule for treating canker: "Keep that foot dry." By keeping the foot dry, Giza would be able to draw the infection out.

To help the abscess heal, Giza trimmed away the excessive flare and thinned the hoof wall as much as he could to take stress off the coronary band. He applied the powder topically, wrapped the foot in cotton, then wrapped it in vet tape and finished by making a duct tape boot around the bottom. He performed these treatments daily until the abscess healed and the hoof regenerated.

Everything was progressing well -- until one day Giza found Achilles down in the paddock with a systemic infection. When Giza first looked at Achilles, he couldn't tell whether his chest was moving. He was completely still and his tail didn't move at all. Giza slowly approached and put his hand on Achilles' chest and in his armpit. He was burning up.

Johnson threw everything she had at Achilles, Giza says. Both of his hind legs and his hips had already swollen. What Giza thought to be synovial fluid started coming out of his coronary band. Giza feared that Achilles was going to shed his whole foot and that would be the end of everything.

Giza contacted the Warrenton Regional Animal Health Lab to ask whether it would be possible to get a sample to them to figure out what was going on and was told to get a sterile swab kit from them. To get the sample, he cleaned the infected area and lanced it. Once he did that, he put the sample in the container they provided and took it to the lab for testing.

It took about 7 days for the lab to return a report. They found Achilles had three major strains of bacteria in his body that were causing the systemic infection. Giza gave Achilles oxytetracycline twice a day, morning and night, for 10 days. This medication had to be administered slowly. If it were administered too quickly, it could have killed the horse.

Around the fifth day of going through this routine, Achilles became very resistant to taking his medication. Each time Giza approached him, Achilles knew what was coming. They fought. Giza tried to distract Achilles with a stool topped with grain, but that didn't work. Achilles knew all of Giza's tricks. Yet somehow, perhaps more because of Achilles' stubbornness than in spite of it, Achilles pulled through.

Giza put his heart and soul into Achilles' recovery and got something wonderful in return. He could see from the first time he worked on Achilles that he was a beautiful horse. He had a long tail and beautiful shoulders. His feet were gorgeous, even after the period of neglect he had lived through.

Giza didn't know this horse's background. He assumed Achilles was from New Holland, Pa., because he picked Achilles up there. But Giza actually tracked him back to the Midwest. Achilles' last known location was St. Louis, Mo. Giza found pictures of him at the Knoxville, Tenn., auction. Achilles made the circuit and was actually pulled off the kill truck at the last minute. When Giza first met him, he could tell that this horse was meant for more than living in a field.

Giza utilized his experience with driving horses every time he worked with Achilles. He would use hitching commands and watch Achilles' ears to observe how he responded. Once Achilles had made his recovery, Giza decided to line-drive him.

It was easy to see the pride come alive in this horse. Because of Giza, he had a job. If he'd been left out in the pasture, he would have probably continued to regress. But it was clear to Giza that Achilles was a driving horse.

Giza decided to go a step further. He contacted a local Belgian rider and asked if she would like to try to ride Achilles. No one had any idea what Achilles would do, but Giza had dressed him in Western gear and he hadn't flinched.

The day the rider came out to ride Achilles, it was cold and windy. Achilles did buck a bit, but she kept after him and went slow. Achilles seemed to remember what he should be doing.

At the end of this healing process, Giza had a wonderful horse that everyone fell in love with. The methods Giza used were unorthodox, but the results demonstrate how thinking outside the box can benefit a horse with unusual hoof-care needs. According to Giza, a lot of people think success is getting from one point to another, but it's really a complicated path. As long as you can assess the horse and think of new ways to treat complex problems, you can overcome even the toughest hoof-care cases. Mollie Nelson has been writing and editing professionally for over a year. A Wisconsin native, she is the Assistant Editor of American Farriers Journal.