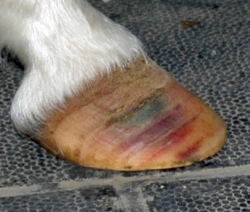 Photo by the author
Figure 1: Bruising in the outer hoof wall.

Any time trimming the hoof reveals a bruise, three questions arise: Why is it there? How much is it affecting my horse? What can we do to help it?

With this in mind, I thought it would be useful to illustrate the most-seen hoof bruises and explain their origins and consequences.

First of all, the insensitive horn of the hoof that your farrier is working on does not hemorrhage with normal trimming, so any bruising that we see in these areas is bleeding that occurred within the hoof capsule and migrated to the insensitive hoof horn, where it then became visible during the trim. If a farrier were to trim a hoof too close, it would bleed, but that is a different look than the old blood left in the bruise we see. It should be noted that the fresh bleeding from a cut or injured hoof does not leave a bruise behind. True, hoof bruising occurs within the hoof capsule and might have happened as much as 2 months before you see it.

Figure 1 shows bruising in the outer hoof wall. This often can be seen without ever trimming the hoof at all, especially on a white hoof as shown here. When we look at a hoof standing on the ground, the coffin bone is attached in the upper third of that hoof. The lower two-thirds can and will distort to uneven pressure while landing and loading on the ground.

If the hoof wall is not on a single plane from the hairline to the ground, stress areas can be created. The hoof wall plane can become either concave (dishing in) or convex (dishing out). This disrupts the continuity of the hoof wall, causing stress points. A convex hoof wall will reveal bruising where that wall is at its highest peak, which is the stress point. On a concave hoof, the stress point and the bruise will show up directly below the concave profile. 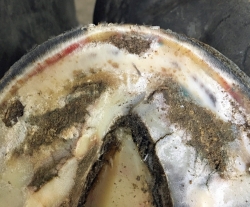 Photo by Scott Morrison
Figure 2: Bruising in the white line at the toe.

The moment of breakover is when the most force is exerted on the front of the hoof wall. Any peaks or valleys in the hoof wall plane tend to concentrate those forces. While these bruises look bad at times, I have not seen them make a horse lame or even show much reaction to the hoof testers. While not ideal, this type of bruising seems to have little effect on performance.

Dressing the hoof wall with the rasp into a single plane from ground to coronet band will eliminate those stress areas and reduce the bruising. Having consistent hoof wall thickness all the way around the hoof will help as well.

Figure 2 shows a bruising in the white line at the toe. You may notice that the bruise is worst where the toe is thickest. The exaggerated dorsal wall thickness is delaying the moment of breakover, thereby increasing the already high stress of that moment. This bruise has more consequences than the previous example in terms of soundness and performance and needs to be addressed before it becomes a real problem. Square- or open-toe shoes, or just dressing back the hoof wall to normal thickness can relieve hoof wall stress in that breakover moment. 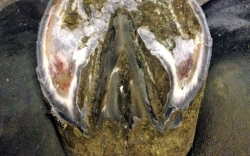 Photo by the author
Figure 3: Bruising in the heel.

Figure 3 illustrated the classic heel bruising that we often see in a racehorse. This comes from overloading the heel, either from a lack of frog engagement, conformation issues and the heel shear that comes from it, or even shoes that are not long enough to support the caudal (rear) part of the hoof. Failing to support the heels with a properly fitted shoe can, over time, bring on this type of bruising.

Horses cope differently with this type of problem. The example shown in Figure 3 is from a world-class performer that retired at the top its game. With other horses, it can be a show stopper. A racehorse feeling the effect of this type of trauma will reveal the problem in the final stretch of a race. The cumulative effects of the pain during the previous three quarters or so are exacting their toll, usually manifested in that final furlong.

The way to deal with this is to create a larger landing surface with circuit plates or bar shoes. Pads alone are not as helpful in dispersing the force of landing, as discussed in my previous article, “Hoof Beats: Beneficial Change.” 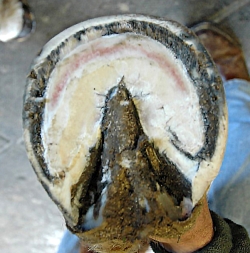 Photo by the author
Figure 4: Bruising in the sole caused by the coffin bone.

I have found that pads and circuit plates can be effective. Trimming the heels lower so they meet the widest part of the frog also can create more surface area and better engage the frog to assist in the distribution of force. Trimming the hoof to allow for even loading and create a larger landing area will lessen the intensity of the forces placed on the hoof when contacting the ground.

Figure 4 is the impression made by the coffin bone on the sensitive sole. This could be the result of a flat foot and thin sole, a hoof that is far too short, or even the result of a bout with laminitis. When a horse is showing bruises like this, performance is definitely compromised and possibly the overall well-being of that horse. If the racehorse’s feet are simply too short or flat, a pair of thick rim pads will help tremendously.

If your broodmare is showing a bruise like this, I would consult a vet for X-rays just to make sure she is not in trouble. If the laminae are compromised, rim pads alone are not recommended because they would only suspend the coffin bone, allowing the bottom of the hoof to sink further. Expert intervention is required in these cases.

While hoof bruising is common, it is not normal. Understanding the possible implication of these occurrences can lead to quicker recovery and future avoidance. Just because one notices bruising in the horse’s hoof, doesn’t mean you always need to see red.

Hoof Beats: Beat By The Heat