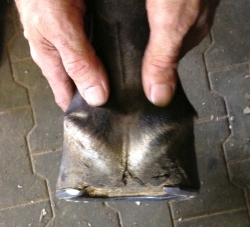 Figure 1: One way to monitor heel shear is to palpate the ungula cartilages.

I recently came across a perfect follow-up to the article about the colateral or ungula cartilages that appeared in the previous edition of Hoof Beats.

As stated in that article, one way to monitor heel shear is to palpate the ungula cartilages (Figure 1).  When palpating these cartilages, I am looking for a noticeable vertical difference between those two structures of the same hoof.

Heel shear is easily detected this way, even if it is not visually obvious or your eye is not used to picking up on it. Figure 2 illustrates heel shear. In this photo, the sheared heel is the side on which the coronet band is pushed higher than the other heel bulb of the same foot. Notice in Figure 2 that the proximal (upper) border of ungula cartilage on the sheared heel is touching the bottom of this horse’s bandage while the corresponding cartilage at the opposite heel remains in a reasonably normal position.

The consequence of this much vertical displacement between the two heel bulbs of the same hoof is evident in Figure 3. The hoof capsule cannot continuously conform (distort) to the uneven forces which caused the heel shear. Once the hoof capsule has reached its limit to adapt, the trauma becomes more evident. In this foot it was a bad quarter crack; in other feet possibly just heel bruising.  Either way, hoof trauma is affecting performance.

As stated in the previous article, palpating the position of these cartilages is a simple procedure once learned. If grooms, trainers and farriers monitor this dynamic aspect of the hoof capsule more diligently, many cases like this quarter crack can be averted before they occur. 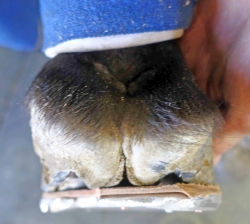 Figure 2: On this hoof, the sheared heel is the side on which the coronet band is pushed higher than the other heel bulb.

Seeing the potential setback of a nasty quarter crack is motivation for learning the clues of prevention. Hoof capsule distortion is a very sneaky character. To put blame upon someone who didn’t notice it is probably unfair. Often tiny changes that occur over a longer time go unnoticed until something more visual happens, like heel bruises or quarter cracks.

Quarter cracks do not just happen; they develop over time. When we see that the hoof horn has cracked, it was simply the last thing that occurred in a process of changes. Similarly, the heel bruise we see in the bottom of a hoof when trimming is hemorrhaging that occurred weeks before and only now became visible.

Ask your farrier or vet how to monitor this type of heel distortion. Either should be happy to show you because it has the power to prevent trouble down the road for everyone involved. Once that distortion is evident, the farrier can take any number of measures to relax that sheared (higher) heel.

Figure 4 shows a z-bar shoe, which is one such application. The old saying “an ounce of prevention is worth a pound of cure” may have been coined when Ben Franklin’s horse popped a quarter crack. OK, probably not, but the idea applies here.

Horsemen are tremendously intuitive at recognizing even the smallest difference in a horse’s leg. I have seen great horsemen and horsewomen save horses from breaking down because of this terrific insight and awareness. Any trainer who has had to scratch his horse from a rich race due to a quarter crack would gladly add this piece to the puzzle of their horse’s overall wellness.