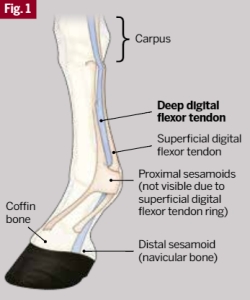 Figure 1: The deep digital flexor tendon (DDFT) passes over the proximal sesamoids (at the fetlock), continues down into the hoof capsule, passing over the distal sesamoid (navicular bone), and attaches into the bottom and back of the coffin bone.

As the name suggests, the DDFT is farther from the surface (deeper) than the SDFT. This is why the bowed tendon (SDFT injury) is a much more visible problem than DDFT issues. DDFT injuries often require an MRI to fully diagnose.

Originating from the deep flexor muscle, the tendon joins that muscle at the carpus, or knee level. The DDFT then extends down the back of the leg. Just above the fetlock it is encased by a ring-like structure of the SDFT, aiding both structures in continuity and stability.

The DDFT passes over the proximal sesamoids (at the fetlock), continues down into the hoof capsule, passing over the distal sesamoid (navicular bone), and attaches into the bottom and back of the coffin bone (Figure 1). It does not bifurcate (divide) like the superficial tendon does and extends lower than the fetlock attachment of the SDFT.

The proximal sesamoids and navicular bone act as fulcrum points for the DDFT, which broadens in form at those areas. Figure 2 is an actual DDFT dissected by Mitch Taylor, owner and director of the Kentucky Horseshoeing School and presented at the annual International Hoof-Care Summit in Cincinnati, Ohio. Note the insertion of the inferior check ligament near the top of DDFT. The opposite end of that check ligament attaches to the back of the knee, which helps stabilize that knee joint against flexion during the loading phase of a stride. In fact, check ligament injuries are more frequent than those of the DDFT.

Note that the terminal end of the deep flexor tendon is well within the hoof capsule, attaching on the back and bottom surface of the coffin bone. This is important to farriery because it means that hoof angle and alignment of the lower joints (distal interphalangeal joints) have a more direct effect on the DDFT than the SDFT, which attaches slightly higher up the limb.

Injuries to the DDFT are often less visually noticeable than a bowed tendon (SDFT) and, very possibly, more impactful. DDFT injuries within the hoof capsule usually involve the navicular bone (lowest fulcrum point of the DDFT). Demineralization, calcification, or injury to that bone can affect the fulcrum surface, irritating or damaging the flexor tendon.

Strain type of injuries usually occur from a bad step of some kind in soft footing compounded by a long toe/low heel, and/or toe grabs, according to Scott Morrison, head of equine podiatry at Rood & Riddle Equine Hospital in Lexington, Ky.

As with any injury from a misstep, fatigue is a huge factor. Long toes directly contribute to muscle fatigue. Remember both the superficial and deep flexor tendons originate from muscles. 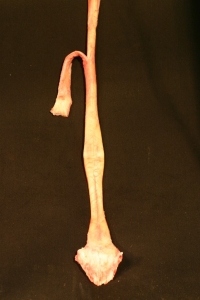 Figure 2: A DDFT dissected by Mitch Taylor at the International Hoof-Care Summit. Note the insertion of the inferior check ligament near the top of the DDFT.

Another important point to consider is the migration forward of the heels on a neglected hoof. The distortion involved moves the base of support forward creating more resistance against break-over and less support from the heels, adding stress on the DDFT. According to Morrison, this migration and loss of base support is at least as important as hoof angle in terms of the health of the tendon. He added that identifying DDFT injuries within the hoof require an MRI while those in the pastern area can be found with ultrasound technology or can even be palpated.

Recovering from a significant DDFT injury is no small task. Expect 10 to 14 days of complete stall rest followed by hand-walking (good luck hand-walking a fit racehorse that has been stalled for 2 weeks). Months of rehab and therapy follow that.

One interesting thing is that Taylor, Morrison and several research articles agree on the importance of keeping the horse moving during the healing process. If the tendon fibers heal in a stagnant and completely rested horse, the resulting scar tissue will not be as conducive to performance as the tissue formed in a moving horse.

In terms of shoeing, a six-degree wedge is shown to reduce DDFT tension based on several studies I have read. Start with 6 degrees for the initial rest period and the onset of hand walking, then reduce with progression. I personally would never put anything more than 3 degrees (and that is rare) on a horse that is going to the track, which would be into the later stages of recovery. It’s important to note here that decreased tension on the DDFT means increased tension on the SDFT and suspensory ligament.

DDFT injuries are serious business to be addressed by horsemen and veterinarians, first and foremost. Farriery can help only after the extent and location of the injury is known and addressed. Strains of this tendon are sometimes manageable.

Morrison and I worked on a pacing filly named Just Wait Kate in 2005. He did the diagnosis and the initial work; I did the follow up and race application. Just Wait Kate won the Jugette shortly after that in world-record time which, as is often true, was more a testament to her rather than us.

No joke at the end this time; just a wide smile for those special moments that make us all love this sport. I think I will go back and re-watch that race.