By Nicholas B Denson posted on September 11, 2015 | Posted in Clients, Safety & Healthcare

Horses all have unique behaviors and personalities. We deal with these variations on a daily basis as farriers. One day, I had a funny conversation with a vet that I work with. He said something about a horse we were working on and I thought it'd be funny to put names to the different types. From that inspiration, here is my list:

1.) The Itcher: Always manages to slide its butt over to a wall and will scratch and rub while you’re trying to work on a front foot.

2.) The Manure Factory: You were only out at your truck for 5 minutes, but you come back to find 10 piles of manure

3.) The Manure Dancer: Usually a “Manure Factory” as well, this horse likes to dance around in any pile of manure it can find, taking great pride in packing freshly trimmed feet with it.

4.) The Nuzzler: This one isn’t bad, until nuzzling turns to teeth, and those tiny neck hairs you forgot you had start getting pulled out!

5.) The Trainer: This horse has bullied and brow beat its naive owner (usually their first horse). Instead of discipline or punishment, treats are given. The horse bites you and is rewarded with a carrot.

6.) The Great Houdini: You go out to your truck and when you return, the horse isn't there anymore. May also be a “trainer” who bullied its owner into taking him for grass while you were working on his shoes. Very frustrating when you’re coming in to hot fit.

7.) The Jailbreaker: This horse has figured out how to use its rear end, typically also an “itcher,” to open his friends stall doors while he’s cross-tied. 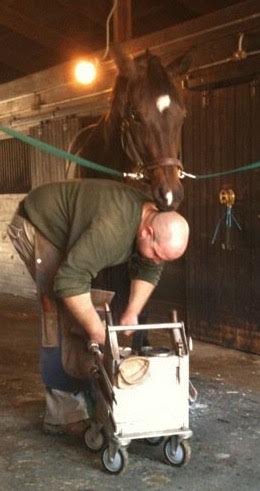 Nicholas Denson dealing with a “nuzzler.”

8.) Mr. Casanova: A stud, or one gelded late, who decided to get an erection when you’re working on a hind foot. And yes, it’s always in the way while you’re working!

10.) The Flight Risk: A shavings bag might as well be the devil incarnate. Sneeze near this one and it’ll turn into “The Great Houdini.”

12.) The Taco Bell: Can horses get cholera? This one always has some putrid, liquified manure running down its hind legs.

13.) The Windmill: It’s a “Taco Bell” that has mastered the art of twirling its tail to make sure the barn and anyone in it gets a nice coating of that liquid manure.

14.) The Cheap Date: This one needs to be sedated, but hits the floor before the vet has even finished administering the sedative.

15.) The Addict: This one’s built a tolerance to all sedatives. The veterinarian looks at you and says, “It should be dead. I can’t given him any more, he shouldn’t be standing right now.”

16.) The Munchausen: I actually love this horse. It’s seen 30 vets and 10 farriers to fix the lameness that can only be seen by the owner. Money to be made on this one. Guaranteed to need $500 worth of shoes, every 3 weeks!

17.) The Overdoser: Supplements are good, but this horse’s owner has it on 400 supplements. You can’t quite figure out where the odor is coming from, but the hooves stink of soy sauce and kimchi.

18.) The Albert DeSalvo: If you have a necklace, or really anything, around you neck, even a hood, he’ll try to strangle you with it.

19.) Trick Pony: Its owner has taught this horse numerous tricks based on hand signals. Unfortunately, wiping sweat from you forehead is the cue to lay down.

20.) The Model: This one is meticulously groomed, has $10,000 worth of tack and gear. You can’t get the owner to trim the feathers, and don’t you dare catch even a single hair on fire. But, this one’s bathed twice daily, so even if you can find the foot to burn a shoe on, it’s so waterlogged you can’t!

21.) The Bad Dreamer: Asleep most of the time you’re working, but when it wakes up mid-foot, the horse panics and rears. Kind of like horsey dementia. The horse knows where it is — until it doesn’t — and then things get bad.

22.) The Buzz Killer: Much like the “Bad Dreamer,” but this one can instantly and completely wake from sedation with absolutely no warning.

23.) The Holistic Horse: While the owner will allow shoes, fly spray is a no-no. It’s poison and BAD! Don’t you dare.

24.) The Politician: Did well in steel, but owner wanted to try aluminum. The horse went even better in aluminum, so the owner went back to steel before going back to aluminum the following time. Now it is barefoot and lame.

25.) The Stevie Wonder: This one likes to rock back and forth, side to side while you work. Kind of like its bopping to the beat only it can hear.

26.) The Slingshot: This one has a hind leg that locks up. Better hang on tight, because when it releases, you might be going to a flight!

27.) The Tattletale: You look at it funny and the horse will try to convince its owner that you beat it with a baseball bat.

28.) The St. Bernard: You never knew a horse could drool so much, but it’s running down your back while you’re trying to finish its front feet!

29.) The Dreamer: This one will try to convince everyone around that there is a giant horsefly on its belly. There isn’t, but it’s just going to go on acting like there is no matter how much fly spray you use.

30.) The Amnesiac: You’ve only worked on this horse for 10 years, but every time you go out, it takes a good 15 minute initial consultation for the horse to decide you’re not the vet, nor are you there to kill it.

31.) The Land Mine, aka The Jack in the Box: Typically well-behaved until the horse launches itself straight into the air, for no apparent reason.

32.) The Diva: This one you have to stretch her legs, rub her withers and continually tell her how nice a girl she is.

33.) The Screamer: Waits until your ear is an inch from its mouth, before loudly and repeatedly calling to all of its friends.

34.) The Comedian: Will take your hat off, pick your pocket, knock you over and kick you toolbox. But does it in a way that you can’t even keep from laughing.

35.) The Headbanger: This is a well-bred horse that has terrible conformation and incredibly terrible feet. They leave you banging your head into the wall trying to figure out why someone would breed for this.

36.) The Hannibal Lector: This horse has to wear a cage muzzle so that it doesn’t eat you. However, it’s found that the muzzle can be used to headbutt you while working.

37.) The Circus Pony: This one will put its left front on the hoof stand, and have right front in the air.

38.) The Kickstarter: This one must have ridden a dirt bike in a past life, because when you pick up a front foot, the horse just acts like it’s trying to kickstart a bike.

39.) The Machine Gunner: Much like a “Kickstarter,” this one can kick with the hind you’re trying to pick up so quickly that you can barely see it. You’ll feel it, but not see it.

40.) The Back Breaker: It won’t help at all and will lean whenever possible. This horse will pull away if it must. Your back makes a good headrest for this horse.

41.) The Tap Dancer: It’s not bad, but it likes to dance on ties. You’re constantly moving your tool box around to his new location. Once you get there, the horse dances back to where it was.

42.) The Eye Doctor: This one has mastered the art of hitting the corner of your eye with its tail. This horse’s aim is as skilled as of a Marine sniper. Itdoesn’t miss, and you won’t know when its coming.

43.) The High Fiber: Every time you pick up its hind foot, there is a release of toxic gas. Usually a horse that’s on MSM, so the odor emitted is as sour as it can be! There seems to be no limit to the number of times it can do it either.

44.) The Hypochondriac: Everything you do seems to hurt this horse. Its reaction will give you an ulcer as you think every nail you drive is a bad nail by the reaction. Walks off sound when you’re done, but you’d have thought you were killing the horse when you were working.

45.) The John Wayne: This horse will let you do your job, but if you’re not doing it right, it’ll tell you. This one will put up with a lot, but don’t cross it. If this horse likes you, you’re its best friend. If not, “watch out, pilgrim.”

46.) The Tasmanian Devil: It’ll make sure to knock over your tool box, dump your nails, rip anything off the wall and empty any shelves that are near it. This horse will look like a bomb went off in the shoeing stall. Basically a whirling dervish.

47.) The Pig Pen: This horse has thrush like you’ve never seen. There’s a manure line about mid-cannon bone because its stall hasn’t been cleaned in a year. This horse is dirty, stinky and seldom well-mannered. Its owner tends to share the same personal hygiene regime, and the property resembles a wrecking yard.

48.) The Farrier: This horse will decide that it doesn’t like your shoes. So, it pulls them, reshapes them, and then leaves the shoes in plain sight for the world to see how it wanted them to look.

49.) The Easter Bunny: This horse is a confirmed shoe puller and likes to hide its pulled shoes. Even though its stall is 12 by 12, and the horse is turned out in a small paddock, its an all day scavenger hunt to find where it hid its shoes.

50.) The Unicorn: Seldom seen, maybe mythical. This horse will stand like a champ, pick up its feet before you even ask. Never kicks, bites, moves, sways, bobs, rocks — nothing! Has simple feet to shoe and is never is lame. Perfect conformation to boot!

Enough Is Enough Of Dangerous Horses

Why Poor Hoof Condition May Be a Result of Gastric Ulcers