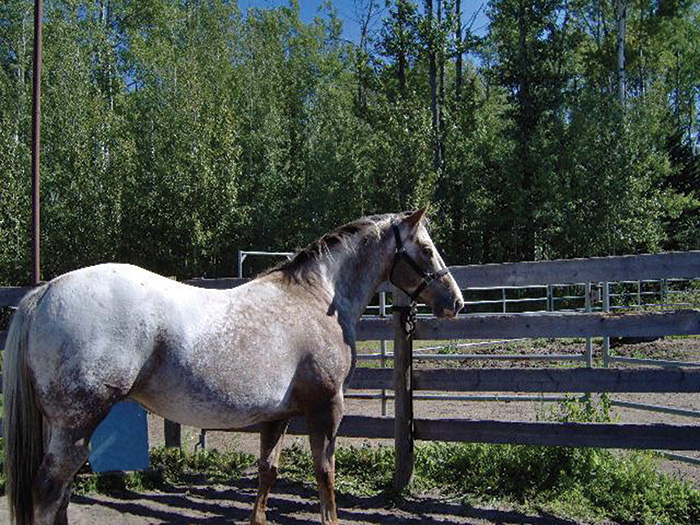 Resection, soaking are among methods used by farrier an vet to return a mare to soundness

ON-AGAIN, OFF-AGAIN LAME. Jessie, a 9-year-old mare, had a repeated cycle of going lame in one of her hind feet. Farrier Patrick Ards and Kevin Breker, an equine veterinarian, discovered that the lameness was due to an undiagnosed chronic abscess.

Jessie is a 9-year-old Appaloosa mare that I was asked to evaluate while trimming and shoeing other horses for a new client.

Her off hind foot was causing her some grief. There was some hoof capsule distortion, while the coronary band above the distortion on the lateral side was somewhat swollen and tender to the touch, as was the lateral cartilage. This mare had been going lame on this foot off and on for approximately 4 years. She would begin to get sore and then break out at the hairline. Soon after this, she would become sound again.

This cycle had repeated a number of times over the previous months. The owner had been led to believe that a damaged coronet band was the cause and that nothing could be done about it. The mare allowed me to trim and balance this foot, but any additional probing was met with severe resistance.

I was concerned that her problem might be quittor, an infection of the lateral cartilage. I recommended that she be seen by Kevin Breker, a veterinarian in the area who does a lot of work with horses and with whom I had worked on a few previous cases.

Jessie was trailered to the clinic in mid-December…