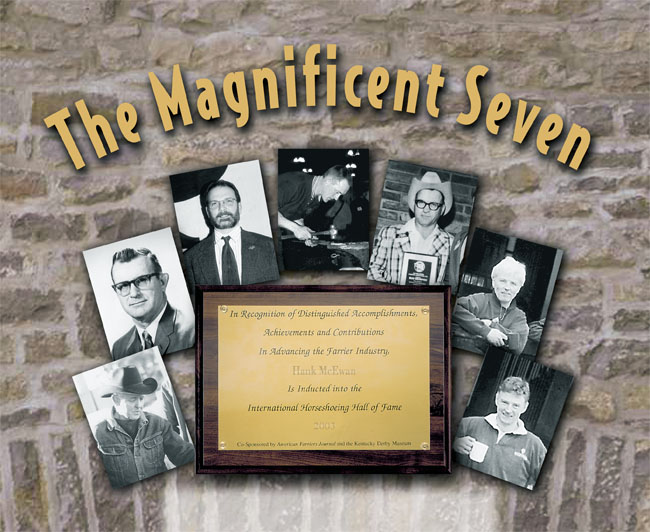 By Michael Austin posted on December 1, 2002 | Posted in Business Practices

Making a positive influence on people’s and horses’ lives in and out of the barn, this year’s International Horseshoeing Hall of Fame class embodies the spirit of farriery

Farriers aren't just horseshoers. They’re brothers, husbands, sisters, wives, co-workers, companions, mentors, trend-setters, educators and so much more. Honored and respected by their fellow farriers, this year’ s International Horseshoeing Hall of Fame class goes beyond the nippers, forge and anvil and into the well being of the horses they treat and the horse owners they work for.

Being inducted into the International Horseshoeing Hall of Fame as the Class of 2003 are:

Nominated by farriers, students, teachers, horse owners, veterinarians, family and friends, this group of seven emerged from the list of 63 nominees sent out to be voted on by the current International Horseshoeing Hall of Fame (IHSHOF) and International Equine Veterinarians Hall of Fame members. With the Class of 2003 members, the IHSHOF, sponsored jointly by American Farriers Journal and the Kentucky Derby Museum, now has 85 members.

Never shy about expressing his opinions, Hank McEwan has plenty of shoeing smarts to back up his talk as he’s been in the farrier business for more than 50 years.

McEwan began his career as a cowboy shoer in the Canadian prairies back in 1948. His shoeing…