The more than 50 attendees of the hands-on clinic welcomed Myron McLane of Somerset, Mass., and Jim Poor of Midland, Texas, on the second day of the 3-day event. They joined Dan Bradley, Roy Bloom, Bob Pethick, Tab Pigg, Conrad Trow and Michael Wildenstein as clinicians.

McLane and Poor jumped right in to offer their expertise in forging.

Poor joined Bloom at the anvil to demonstrate how to forge a fuller. 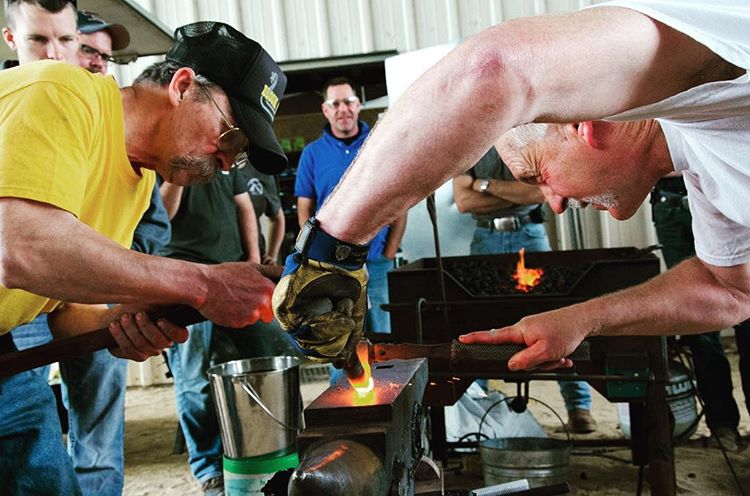 “Every young man,” Poor says, “who is drawn into horseshoeing needs to know how to make tools.”

In the midst of forging the tool from 2-inch round stock, Bloom explained the role of the striker beyond the obvious.

“If you want to be the striker, your job is to anticipate what your partner is going to do,” says the Drummond, Wis., Hall Of Famer. “Every time something is lined up, get behind that hammer handle. Don’t go off to one side or another.”

“You want to be working over the material so you can tell whether it is flat against the anvil,” he says. “If it’s not, it won’t be straight.”

When drawing clips, McLane says there’s a common mistake that many farriers make.

“There’s a tendency to pull the clip back toward you with the hammer,” he says. “Everything you accomplish you accomplish by hitting down on the material. Look down, make sure it’s flat, then hit it.”

The final day of the clinic will see two more Hall Of Famers join the fray — Dave Farley of Coshocton, Ohio, and Grant Moon of Wales, United Kingdom.