By American Farriers Journal Staff posted on May 16, 2022

International Horseshoeing Hall of Fame member Bill Miller of Olympia, Wash., passed away Sunday, May 15, 2021. He was 96.

A charter member of the American Farrier’s Association, Miller shod horses for 65 years and was a well-regarded teacher and outstanding clinician. Farriery wasn’t a job for Miller, it was a way of life. He believed that any shoer who leaves their work inside the barn isn’t a true farrier.

“This is not a job that you just go out and work 8 to 5,” he told American Farriers Journal in 2002. “It’s constantly on your mind. You think of what you could have done different or how you could improve the horse.”

It’s not just the mental side that keeps farriers like Miller up at night. Horseshoers are their own boss, which means they have to take care of all the little things at night that they can’t do during the day.

“You’re the CEO of your company, but you’re also the janitor,” Miller said with a chuckle. “You handle the public relations, the billing and anything else that comes up.”

Before beginning his career in farriery, Miller served his country aboard the USS New Jersey during World War II. The GI Bill enabled Miller to study farriery under Jack MacAllen at Michigan State University. He began shoeing in 1947 as an apprentice in his native Illinois, earning his state shoeing license and working the harness tracks. 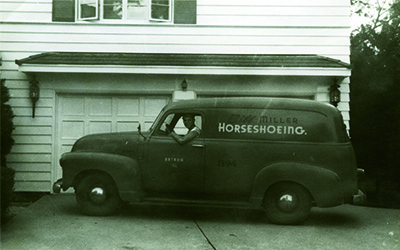 While shoeing rigs and trailers are common today, that wasn’t so in Miller’s early years as a farrier. His first truck was a 1950 Studebaker half-ton pickup. It served its purpose, “but it was hard to maintain the equipment in the back with just a tarp thrown over my tools.” To remedy the problem, he upgraded to a 1952 Chevrolet panel truck.

“Two horseshoer idols, Tommy Wilkinson and Joe Scholten, each drove a panel truck,” he told American Farriers Journal in 2007. “I figured that was the way to go.”

“Back in those days,” Miller recalled, “you had to haul out your coal forge and set it up separately away from the truck. You had to get out your other tools, too. You’d spend about half an hour just getting ready to shoe a horse. I found out that working out of a panel truck, I spent more of my time on my hands and knees than I did in church.” 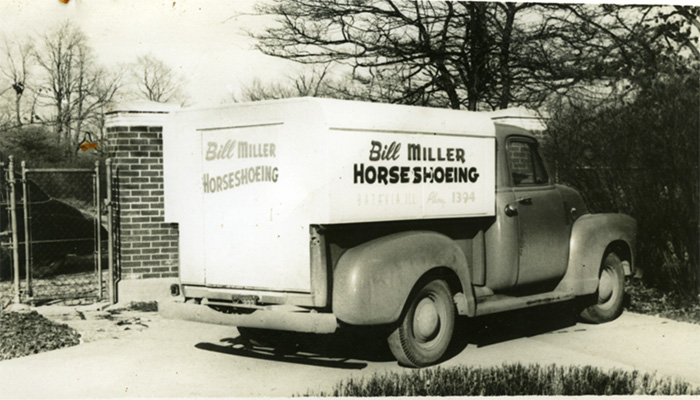 After a couple of years, Miller grew weary of crawling. He designed a shoeing body that was a forebearer to the drop-in units that many farriers use today. It featured doors on both sides, as well as the back to provide easy access to his tools and shoes, which were sorted by size in several bins.

“That eliminated all the trouble of crawling inside the panel truck to find the right shoes and tools,” Miller recalled. “I still had to pull out the coal forge, though. I put up with that for a good many years until the gas forge came along.”

When Albuquerque, N.M., shoer Walt Taylor launched the American Farrier’s Association in 1971, Miller was among the first to join.

“It used to be if another farrier saw you, they would turn their back on you if they were doing something tricky,” Miller explained. “And speak to you? No way! But once we gathered horseshoers in an association, we saw tremendous change in the horseshoeing world. What took us 20 years to learn, it takes these kids about 5 years now. People are willing to share knowledge.”

After shoeing horses in Illinois, Miller packed up his tools and went West in the 1970s to Washington state where he was also head of the shoeing program at South Puget Sound Community College for a number of years.

“I particularly impressed with the care he has given to our favorite gelding, which arrived from California with a mild case of white line disease,” Karen Munes, horse owner, wrote when nominating Miller for the Hall of Fame. “He has worked with our vet in treating the problem and has been in touch with Burney Chapman [Hall of Fame member from Lubbock, Texas] to obtain his advice.”

Always striving to learn more, Miller kept his clients informed through many articles on topics of particular concern to them and their horses.

Miller was inducted into the International Horseshoeing Hall of Fame in 1996.