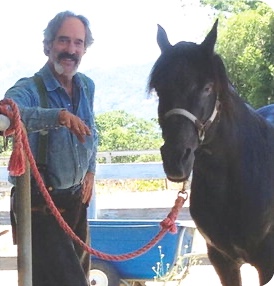 Glen Ellen, Calif., farrier and educator Stuart Greenberg passed away Dec. 25, 2021, in Napa, Calif., according to the Kenwood Press. He was 73.

In 1978, he studied farrier science at Colorado Northwestern Community College School of Horseshoeing in Steamboat Springs, Colo. Horseshoeing ultimately became his lifelong passion and career. Not only did he shoe for 43 years, but he also taught farrier science at Santa Rosa Junior College in California for more than 30 years.

In 2011, Greenberg was inducted into the Equus Hall of Fame by the Sonoma County Horse Council as a testament to his years of humble and dedicated service as a classical farrier, and as a teacher and mentor to hundreds of equestrians in Sonoma County. His students included owners, veterinarians and aspiring farriers. He consistently received the highest evaluations for his class. His farrier technique is a dying art. He forged all his own shoes, making each set at home before he left for his shoeing appointments. His practice evolved into shoeing horses that needed special care and rehabilitation. He viewed helping the horse as his primary focus, whether it was a little girl’s pony with founder, or a retired horse needing comfort during its senior years.

When he was not shoeing horses, Greenberg enjoyed blacksmithing as he created custom fireplace tools and irons and small decorative pieces. Another pastime that gave him great pleasure was riding his Harley-Davidson motorcycles.

No memorial service is scheduled at this time.

Arizona Farrier And Educator Passes Away