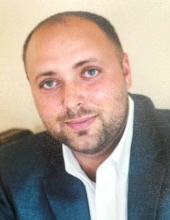 After graduating from Lyme-Old Lyme High School graduating in 2001, Lewis began apprenticing to become a farrier under the guidance of Tim Kriz of Bethany, Conn. In 2003, Lewis bought his first shoeing body and opened Lewis Horseshoeing. His ambition and drive led to 18 years of success. He married Caitlyn in 2013 and bought a farm in Colchester, a dream they had since the day they met. A few years later they welcomed into the world two beautiful boys, Stetson William Lewis in 2017 and Waylon Edward Lewis in 2019.

Lewis was man always in motion with many projects on the farm. He loved working with the boys in the tractor mowing fields, cutting trails through the woods, planting gardens and building anything the boys asked him to. He loved driving horses, fishing with Stetson and drinking chocolate milk with Waylon. He had such a vision of his family’s future and was building a post and beam barn from lumber he logged off the farm. He was a kind and gentle soul; anyone who met him became a friend. He was a devoted father and husband. He loved his family deeply and the life he created with them.

There will be calling hours from 5-7 p.m. Thursday, July 1 at the Thomas Neilan & Sons Funeral Home, 48 Grand St., Niantic, Conn. A private service for family will be Friday. In lieu of flowers, donations can be made to Matt Lewis’ Childrens Fund at Liberty Bank. Condolences may be shared on his memorial page.