When Vermont horseshoer Deanna Stoppler purchased a raffle ticket to raise funds for disabled and injured farriers, she knew that her money was going to a good cause. What she never expected is that she would actually win the grand prize — a fully stocked Stonewell Bodies Middi Horseshoeing trailer worth $20,000.

“I was so excited and my adrenaline was so high I thought I might actually be sick,” Stoppler said. “Then I just felt incredibly grateful.”

Before winning the trailer, Stoppler conducted her business from a GMC Sierra 2500 with a commercial cap and a Classic 1000 bedslide in the back where she kept her anvil and the bulk of her tools. She stashed adhesives, hoof boots, glue-on shoes and miscellaneous inventory in the backseat.

“Everywhere I went I had supplies in my backseat,” she says. “It didn’t feel very efficient but it worked.”

Besides feeling more organized and efficient, Stoppler says the trailer has had a life-changing impact on her physical well-being.

“The truck was pretty high,” she says. “I would have to take the anvil off the bed slide, pick it up above my waist, turn it around and when I was done, hoist it up and turn back to put it away. After a long day that can be difficult to do.”

Her newfound efficiency is also unparalleled.

The trailer alone would have been amazing, Stoppler says, but on top of that it came fully equipped. “The forge heats shoes more quickly than my old forge; the bandsaw kind of freaks me out because it’s so powerful, but it cuts through a variety of materials and is easier to use than a pad cutter,” she says. “And I have plenty of storage for shoes.”

It’s also the perfect size to back into and out of narrow driveways with no turn-arounds.

“I’ve become a master at maneuvering,” she says.

After winning the trailer, Stoppler wanted to pay her good fortune forward. She outright gave away her commercial cap and her old bedslide to two other farriers, Peter Rainville and Scott Bissonette, respectively.

Since graduating shoeing school 2 years ago, Rainville had been using an old cap his father gave him. It was pretty beat up, Rainville says, and had a wooden door on the verge of coming unhinged. Rainville’s new cap from Stoppler is a significant improvement — offering a backdoor that covers his entire slideout and enables him to work in the rain without getting his tools wet. It also has a window, and a cupboard for storage. 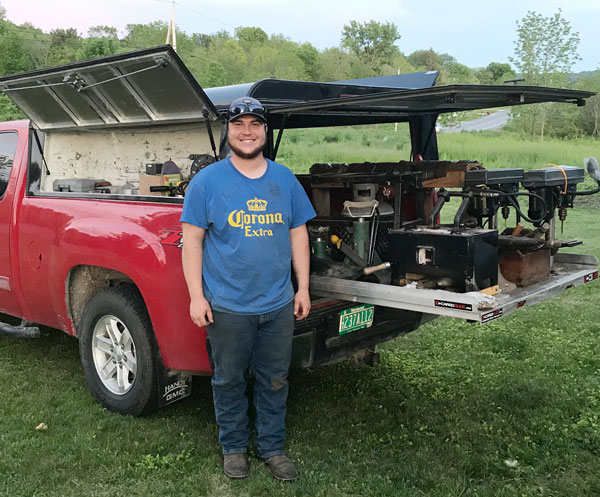 “I am so thankful for the friend Deanna is,” Rainville says. “The farrier world can be tough and it’s so great to have close friends to lend a hand when needed.”

It’s that sense of community among shoers that was the spirit of Injured and Disabled Farrier Fund the trailer raffle supports. Last year, the raffle raised about $1,400 per association, says Chuck Milne, who owns Texas Farrier Supply 2 and helps organize the fundraiser.

“Our initial intent was to raise money so that the people who go to the injured farrier’s aid don’t have to reach into their own pockets to help out,” Milne says. “Thanks to the generous donation of shoes and nails from Werkman and Kahn Forge, more of the money we raise can go to help the injured person. Oklahoma Professional Farriers Assn. increased its weekly payout of $200 a week for 6 weeks to $400.”

Dick Fanguy, national sales representative for Stonewell Bodies, which donates the trailer, explains that giving back to farriers in this way makes sense.

“Our company is based in this industry,” he says. “We have to support it.”