By Chelsea Moskow posted on March 9, 2019 | Posted in Education

When pulling clips or trimming hooves, a lot of young farriers don’t think about where they’ve learned how to do this. They just do it. They might not know who Bruce Daniels or Bob Peacock were, but the young farrier knows the skills all the same. But it does matter where the knowledge came from. In collaboration with Dick Fanguy, former American Farrier's Association (AFA) president and Chuck Milne, owner of Texas Farrier Supply #2, Eric Nygaard brought up the idea that they’d all been thinking on — a memorial representing the farriers who have died but have contributed so much.

Expert wood- and metalsmith, Tom Willoughby has been diligently crafting the “The Silent Anvil.” It is a wooden statue made out of Dominican mahogany depicting a hammer, anvil and base. Brass name plaques will be attached. Farriers who have passed away in 2018 and forward as well as those who have contributed to the farrier world in a mentoring or other productive way will be featured on the memorial. To qualify, a farrier must be an involved, active member of the AFA. This could include certifications, clinics, mentorships, judges and other areas of involvement.

Although each member is important to the AFA and the farrier world, it would be impossible to add everyone to this memorial. The AFA Achievement Committee is working to establish a set of rules and policies. The unveiling took place Tuesday, March 5 at the AFA’s annual convention in Tulsa, Okla.

“It’s not only going to be a memorial, but a work of art as well,” Nygaard says. 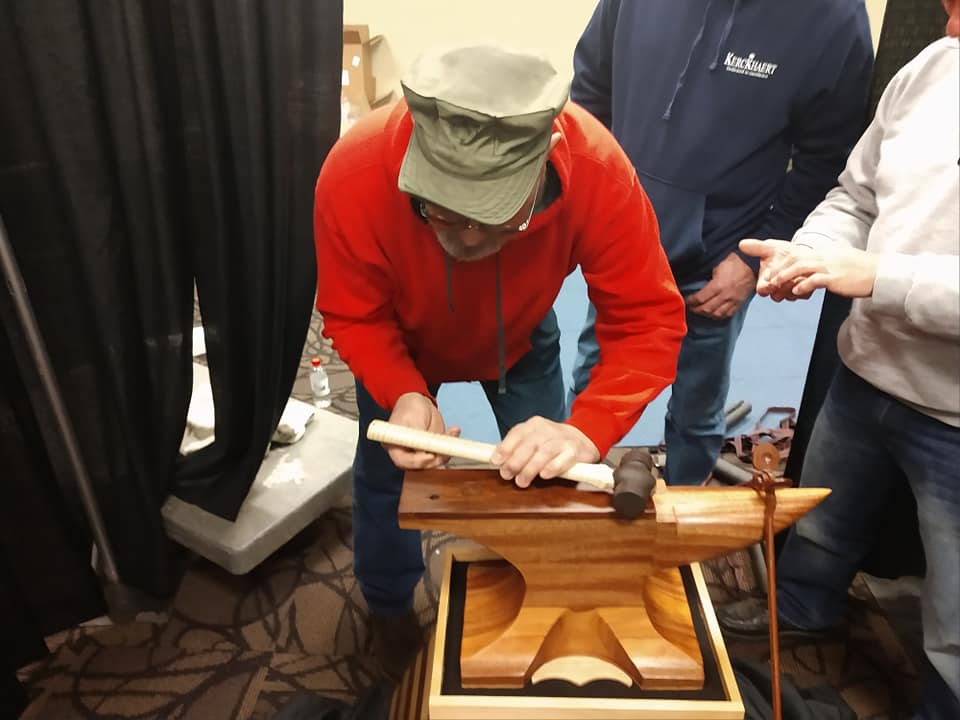 Photo: Eric Nygaard. Tom Willoughby adjusts the memorial. It was made to be disassembled for easy transport to and from events.

The idea came about after so many awards have been renamed in honor of previously passed farriers who’ve made large contributions to the farrier world. Every year, the AFA is asked to change names of awards or add awards to honor those who have passed. But it’s getting difficult to keep adding names to awards. By introducing the memorial anvil, the names can be added and honored for everyone to see. When one memorial anvil is filled, they’ll construct another, Fanguy says.

Fanguy, Milne and Nygaard thought of this memorial because they want a way to honor the legends in farrier history. Pat Gallahan who recently passed away, is one of the farriers that Fanguy hopes to honor.

“[Gallahan’s] claim to fame is that he shod Arabian show horses, but if he was working at a horse show and a young farrier came up and said, ‘hey, I need some help pulling clips,’ or ‘I don’t know how to extend the heel,’ Pat would take all day to show him. That’s why we need to honor him,” Fanguy says.

When Fanguy was just starting out as a farrier and he left rural Louisiana, he was shocked at how giving farriers were of their time and knowledge to help others in the field learn.

“This is stuff that young people need to know about,” Fanguy says. “They really need to know who these people were.”

The memorial anvil will be designed to come apart for easy shipping to all AFA events and some others, including the International Hoof-Care Summit.

The men creating this memorial are paying for it themselves with no AFA budget being used. The costs are estimated to be around $8,000. They are accepting donations, but no corporate sponsorships are being accepted. Corporations may donate, but no names other than those being honored will be added to the memorial. Checks can be made out to the American Farrier’s Association. Please include “Silent Anvil” in the memo line on the check.