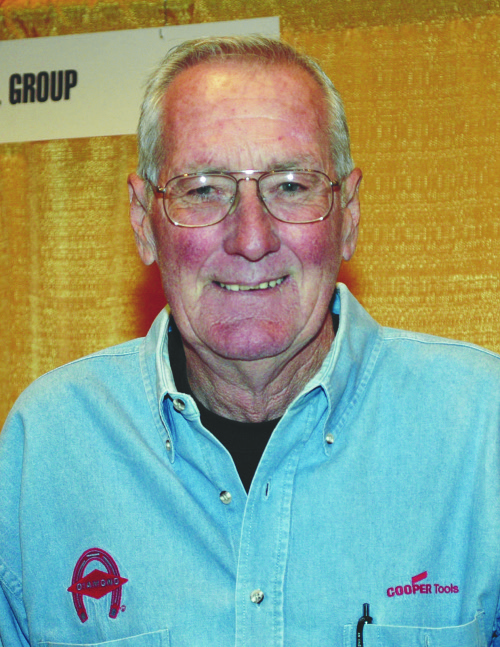 Danny Ward, a highly respected and beloved farrier from Martinsville, Va., passed away Thursday, March 22, 2018. He was 73.

A third-generation farrier with more than 50 years of year of shoeing experience, Ward worked tirelessly to improve the trade. He owned and operated the Danny Ward Horseshoeing School — formerly the Eastern School of Farriery — and hosted the Eastern Farrier Conference for 4 decades. The event began informally when a friend came by Ward’s school to show off his new shoeing rig, and went on to draw farriers from all over the East Coast — and the country — with more than 100 presenters over the years.

“There were four men who influenced my early education as a professional farrier — Eddie Watson, Scott Simpson, Burney Chapman and Danny Ward,” Chandler, Ariz., farrier James Weatherford wrote in a Facebook post. “Today, with the news of Danny’s passing, all four of those anvils are silent. [I] can’t count the number of times I drove from Little Creek Naval Amphibious Base, Va., to Martinsville, Va., while I was stationed on the East Coast to learn what I could. I was too young to appreciate the kind of greatness I was around at the time, but I sure came to honor it as I grew up and older.”

He also demonstrated his commitment to education by writing nearly 100 articles on farriery for trade publications including American Farriers Journal, which he first contributed to in 1977. His articles aimed to improve farrier business practices, addressing topics such as proper tool use, maintenance, selection and storage.

“Danny was a true gentleman, a wonderful mentor and a great friend," wrote Pat Tearney, former managing editor of American Farriers Journal. “The world is a sadder place today for those of us who were fortunate enough to know him.”

Ward lectured at countless farrier clinics and conferences, including the International Hoof-Care Summit. He has been honored with the American Farrier’s Association’s Outstanding Clinician Award and the Outstanding Educator Award.

He was a four-time member — and 4-year coach — of the North American Farriers Team, judged several forging competitions including Stoneleigh in England, the Heavy Horse Competition in Scotland, the AFA Convention and the World Championships at the Calgary Stampede twice.

A highly sought after therapeutic shoer, Ward also educated farriers on the benefits of open bar shoes. He was known for his skill, humility and dedication. He was a member of the Anvil 21 Club and an early inductee of the International Horseshoeing Hall Of Fame.

“Danny’s impact on this industry is impossible to measure,” Travis Burns, president of the American Farrier’s Association, told American Farriers Journal. “He set an example that we should all attempt to emulate. For a man with so many accomplishments, I never once heard him brag. All I ever saw him do was greet everyone with a smile and handshake. When he greeted you, even for the first time, you thought you were the center of the world for that moment. Then after that, he wanted to know all about you, how things were going and so forth. I never saw a person he wouldn’t help with anything, much less a fellow farrier with a question.”

How did Danny Ward affect your life as a person or farrier? Share your thoughts and memories in the comment section below. A tribute to Ward and the indelible legacy he left in trade will published in the May/June 2018 issue.