Building The Next Generation Of Equine Advocates

The American Horse Council has tracked the declining number of horses since the early 20th century. Fewer owners means less exposure to horses for the general public.

TimeToRide hopes to change that. The 2015 plan is to connect tens of thousands of equine enthusiasts to horses through grassroots efforts. TimeToRide wants stables and other equine centers to host events to help people learn more about horses and hopefully spark a lifelong interest. You can learn more about this and apply for grants to aid in hosting events by visiting its website.

The equine industry desperately needs the support of educated advocates. Without the efforts of programs like TimeToRide, fewer people who lack access to horses won’t gain that valuable experience and the result will spell trouble for the equine industry.

We see how this is playing out in New York City with Mayor Bill de Blasio’s foolish pursuit of the carriage horse ban. This has nothing to do with the horses or their care, but is simply a reward for a real estate tycoon who helped fund de Blasio’s election. Get rid of the horses, then the stables are torn down and a parking garage goes up. That doesn’t make a good story for the ban’s proponents, but weeping over “poor, mistreated horses” does.

And this has largely been the narrative for those who want to get rid of the carriage horses. They say the horses suffer through the work and live in poor, uninhabitable conditions. It is the shrieking of nitwits who know as much about horses as they do about the idiotic electric cars de Blasio wants to replace the carriages with. They like horses, but don’t actually understand the animal or how to take care of one.  Compare this view to the informed opinions of true horsemen and equine advocates. Here are a few thoughts taken from a story we ran earlier this year on this subject:

During an unannounced inspection in December 2013 of Clinton Park Stables on 52nd Street, Dr. Stephen O’Grady of Northern Virginia Equine found that the stalls were not cramped.

“I went to every stall,” he says. “They can get up. They can lie down. They can turn around. It is not confined whatsoever. In other words, it’s not inappropriate for these style horses.”

In addition, city law mandates 5 weeks of vacation at a stable that allows daily access to paddock or pasture turn out. The roughly 220 licensed carriage horses are sent to farms in Pennsylvania, New Jersey and upstate New York for a minimum of 5 weeks, according to the Horse and Carriage Association of New York. Records must be maintained to prove the vacation time was received. 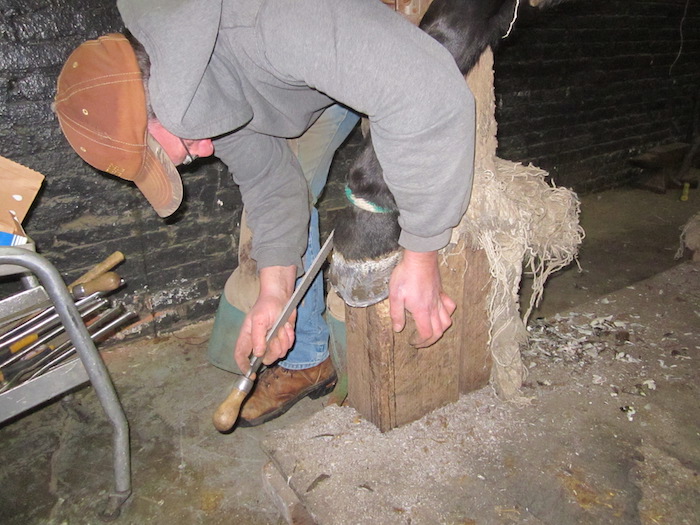 Aaron Hoover, a Lancaster County, Pa., farrier, rasps the clinches while finishing shoeing Vasco, a New York City carriage horse. Hoover, who has been shoeing for 9 years, provides farriery for about 40% of all of the carriage horses in the city.

Carriage horses also are examined by a veterinarian two to four times a year, and must be appropriately trimmed and shod.

“The farriery on the horses was very, very good,” says O’Grady, who was a farrier for 10 years before earning his veterinary medicine degree and maintains a practice devoted to therapeutic farriery. “One of the biggest things that keeps these horses sound is what you do with their footcare. We made some recommendations that were carried out straight away, and in a very good manner.” …

As anyone who spends any significant amount of time in a barn, this is no easy feat, O’Grady says.

“You could not get the smell out of there in a week to 10 days if you tried,” he says. “This is just another indication as to the conditions and cleanliness in which these horses are housed.”

The proposed ban is in the news again because de Blasio is pushing the legislation hard. Thankfully, two-thirds of New Yorkers want the carriage horses. But money often speaks louder than the preference of the voting majority, so who knows how this will play out with the city council.

But this is just one example why it is crucial to introduce people to horses and enlist more advocates for the horse who understand the animal and support the industry. Because if a minority gets rid of the Big Apple’s horses, what’s the next target? This is bigger than saving the jobs of the hardworking carriage drivers and those who care for the NYC horses. Allowing the loud minority to shout its uninformed platform while the threatens the equine industry as a whole.

Training the Next Generation of West Texas Farriers