In its continuing effort to improve the health of working equids, the Equitarian Initiative (EI) is raising money to help send a young Honduran veterinarian to learn farriery at a United States shoeing school.

Over the past 5 years, EI has trained volunteer vets to organize and deliver health care to horses, donkeys and mules, as well as educate animal care providers each fall at Universidad Nacional de Agricultura, Honduras’ lone veterinary college. This education is necessary, according to EI, because the vast majority of the horses in this economically poor country are integral for the survival of many small farmers and poverty-stricken city dwellers.

During its second year of the project, EI met Dr. Dennis Benavidez Matamoros when he was a student at the vet school. He became known for his veterinary skills and ability to handle and calm the most frightened and aggressive untrained horses. Since graduating, Dr. Dennis — as he’s known — has continued to work with the Equitarian Initiative, as well as its partners at World Horse Welfare, where he has developed a keen interest in farriery and equine podiatry.

EI’s January workshop in Costa Rica served as a turning point of sorts for Matamoros, who had the opportunity to work with Paul Dorris, owner of Arkansas Horseshoeing School.

“Recognizing his talent, enthusiasm and leadership potential, Mr. Dorris has generously invited Dr. Dennis to attend a 6-week farrier course at his school,” according to EI. “Additionally, Dr. Dennis has been invited to shadow American Association of Equine Practitioners Board member Dr. Tracy Turner to continue his education in the areas of podiatry and lameness.” 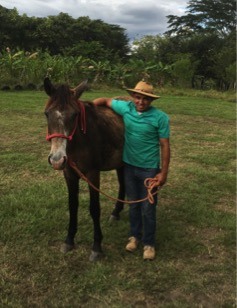 Because of the deficiency of large animal veterinarians and equine podiatrists in Honduras, Matamoros’ education would be a boon to his impoverished country.

“The potential to have a gifted veterinarian in Honduras who loves to teach and provide veterinary services to horses is exciting and could have a sustainable impact throughout the country as he goes on to train others,” says Julia Wilson, a Minnesota veterinarian and president of Equitarian Initiative.

EI has established a fundraising campaign to pay for Matamoros’ travel expenses in the U.S., as well as a small stipend to support his family while he is away from work in Honduras. To learn more or donate, a tax-deductible donation can be made at equitarianinitiative.org by writing “Dennis” in the comment line, or visit the Initiative’s GoFundme site.

“We are trying to heighten the level of knowledge and skill in equine lameness and farriery in Honduras,” Turner says. “Dennis is very talented and eager to be mentored for this purpose. If you want to build for the future, you need to invest in the now.”

Take A Few Minutes To Recognize An Outstanding Young Farrier