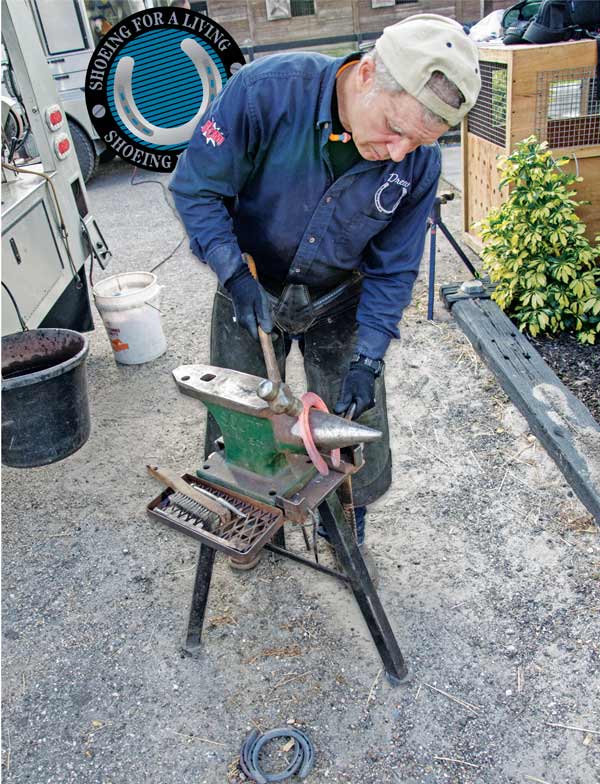 Taking The Time With Each Horse

By Jeremy McGovern posted on March 6, 2017 | Posted in Disciplines & Breeds

Decades into his farrier career, Drew Golden still looks for every opportunity to learn from the horse

When he was a young man, being a farrier wasn’t on Drew Golden’s radar. Born on Long Island, N.Y., he didn’t even have much interaction with horses. Instead, his passion rested elsewhere. Golden was an accomplished musician, studying the subject and playing saxophone in bands. He still plays in a band today, making the time between a busy work schedule and family time.

It wasn’t until his family moved to Jupiter, Fla., in the late 1970s that Golden found his new passion with horses. Golden began working with his uncle, Matty Spinelli, who already was in Okeechobee, working around South Florida.

Golden became hooked and invested himself into his new trade. As he progressed, the young farrier began working and learning from knowledgeable shoers who traveled to or were based in the area, including George Fitzgerald, Sid Bundy, Mike Weaver, Seamus Brady and Cappy Kaplan. He credits that access to helping his education and growth.

“I was very lucky in that regard for being educated,” he reasons. “I had friends in other areas who had to drive for hours so they could go to a hammer-in. But I had access in my backyard to some of the best farriers, as well as other top veterinarians, trainers, riders and horses.”

Today, Golden’s sport horse practice remains based in Wellington, Fla. Golden also will shoe for clients who leave Wellington for North Carolina, Kentucky, New York and throughout Europe. He says traveling as a farrier may seem exciting to those on the…

Practical Advice for Reading the Horse

A Deliberate Approach with Every Horse

Watching The Horse At Work