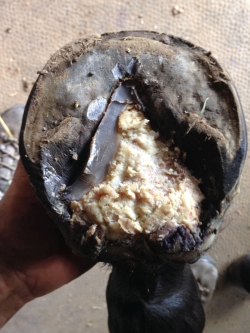 Figure 1: The frog of this weanling’s hoof has been completely consumed by canker.

Canker is a rare hoof disorder that involves the frog of a hoof. I personally have seen only two or three canker cases over many years of shoeing.

Canker is a vegetative growth of the frog. It might involve the sole adjacent to the frog, but this is rare and only in advanced cases. Figure 1 shows a frog that has been completed consumed by canker. In its early stages, canker is easily confused with thrush. Like thrush, it is extremely malodorous, although the smell of canker is different than thrush.

How a horse gets canker is speculative. Early theories suggested that, like thrush, canker could be contracted in an unclean, ammonia-rich environment such as a dirty stall. Scott Morrison equine veterinarian and head of podiatry at Rood and Riddle Equine Veterinary Clinic says that more recent studies point toward a viral infection that could be picked up through the bloodstream or on the surface of the frog itself. The horse in the photos is a weanling that was not kept in a stall before getting the canker, suggesting the viral theory. Canker is not contagious, usually showing up in one hoof on one horse.

Treatment of canker is an involved process. Debridement (cutting away the diseased portion) of the affected tissue is critical to success as canker is almost cancerous in nature. Equine vet Tracy Turner recently wrote in The Horse magazine that treating canker without debridement has little effect. Morrison, who helped with the case in the photos, recommends blocking the hoof to numb the tissue, then cauterization of the affected tissue with a hot iron and debridement. This is to reduce the hemorrhaging which, in these cases, can be significant.

Figure 2 shows the same hoof after initial treatment. A shoe also has been applied to accept the hospital plate (a removable aluminum protective shield). Cases differ, but at least three such treatments are required to remove all affected tissue. Morrison advocates several treatments because trying to remove all cankerous tissue at one time would be far too invasive.

In between these debridement episodes, the hoof is cleaned and packed every other day with a metronidazole and oxytetracycline paste. This is where the removable hospital plate comes in handy to give access to the hoof for treatment, as well as protection. Care should be taken when cleaning and repacking as the tissue is very sensitive and one should always wear gloves. Taping around the shoe is also helpful to keep the inside of that hoof as dry as possible.

Once all cankerous tissue has been removed, the healing process can begin. The shoe and plate will come off in 4 to 5 weeks if all is well and full recovery is 3 months or more, depending on the individual case. Figure 3 shows the horse at 3 weeks and a healthy frog is already becoming visible.

Recognizing canker can be tricky, especially in the early stages. In this case, the canker was growing underneath the healthy frog, showing only at the heels — almost like a skin infection. The canker wasn’t obvious until I trimmed the undermined frog completely away, revealing what you see in Figure 1. It looked like rotted cauliflower. The odor also had become a strong indicator at this point.

If left untreated, canker can have dire ramifications. This is just one reason that a routine of hoof care and observation is so important. Without that routine, this weanling may have had a very different result.