Smith’s His Name, Horseshoes Are His Game

Thousands of horseshoes, bound for the scrap heap, are the artistic medium of choice for Joe Smith, who welds them into large-scale treasures

Pictured Above: Joe Smith’s half-scale double-wing biplane was modeled after a Stearman PT-17 Kaydet biplane. Just for both wings, he welded together 1,344 horseshoes.

What some folks might see as worn out, bent-up trash pulled off the hooves of horses is actually a treasure to Joe Smith.

The 90-year-old former bulldozer operator has been turning recycled horseshoes into metal sculptures for more than 30 years, with some of the work adorning local museums or attracting interest from around the world.

As soon as you turn onto Smith’s property near Leedey in the plains of western Oklahoma, you’ll see towering metallic figures made completely from welded-together horseshoes.

“They’re pretty forgiving to work with. When you get the old nails cut out and they’re straightened out and you get the rust off of them, they’re pretty fascinating to me, working with different sizes and kinds,” says Smith. “It doesn’t take that many tools. It just takes wanting to do it.”

Joe’s father was a blacksmith and Joe was exposed to metal working at an early age. Early in his career, he operated a Caterpillar bulldozer near the Oklahoma and Texas state line and built farm ponds and terraces and handled other dirt work for local farmers.

“I ran the bulldozer all day and when I came home I worked here at night,” he says.

When he got serious about his horseshoe welding art, he sold the dozers. And added a coal forge and trip hammer.

Joe also has collected blacksmith tools, anvils, hammers, wrenches and thousands of horseshoes from farriers all over the country that are displayed on their porch. There are also plows, buggy steps, branding irons, firearms, cast iron implement seats, hay rakes, tractors and crawlers.

His large-size artistic welded art of a Texas Longhorn steer and a buffalo are featured at the Route 66 Museum complex in Elk City, Okla. 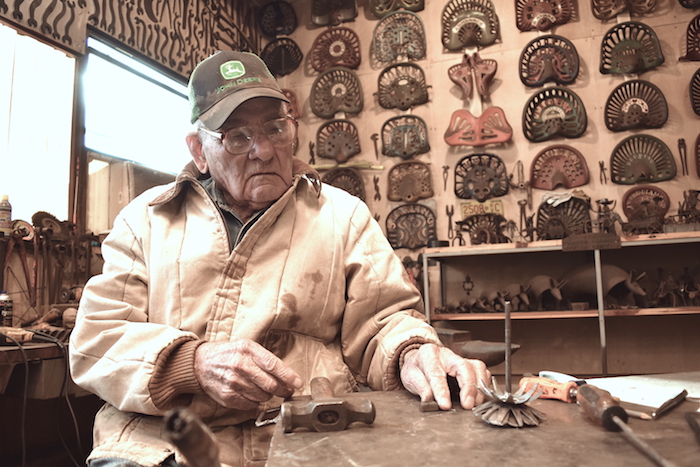 Joe Smith says old horseshoes are pretty forgiving to work with when creating towering metallic figures. Once you get the old nails cut out and the shoes are straightened out and you get the rust off them, they’re pretty fascinating, he says.

Early on, Smith got most of his horseshoes from a large capacity Adams, Okla., feedlot. “They just pitched them out there in the dirt, sand, grass, burrs, everything. Then the game warden in Guymon brought me three 55-gallon barrels of them — I’d guess that included about 3,000 horseshoes,” he says.

He now gets them from a farrier in Custer City for 20 cents a shoe.

“If I don’t buy them, they sell them to the scrap yard for iron. They melt up good, evidently,” he says.

The horseshoes often don’t come to him ready to use. About one out of every four shoes has bends and twists from when they’re pulled off the horse.

“Some of them have sat in the pile and rusted up, or they’re bent together or worn out. But you don’t throw those shoes away because if you need a piece of iron, you can always chop something off,” he says.

To prepare the horseshoes for their second life, Smith places a few dozen in a row on a workbench, uses a cutting torch to remove the nails and then uses more tools to straighten out any kinks.

Smith also tumbles the horseshoes, about 65 shoes at a time, in a cement mixer for 20 minutes. “You have to clean up the edges, or the welder won’t properly weld them,” he notes.

In addition to torches, his tools of choice are a hammer, anvil and swage blocks to hold the hot metal shoes for shaping. “I’ve got a forge at my shop, but the coal makes a lot of mess, so I have a propane one that makes it a lot easier.”

Where does he get his ideas?

Smith says the project he’s most proud of is a 44-foot tall saguaro cactus.

“I went to go up there and put the arms on it, but the arms were a mess with crooked horseshoes that I needed to make that curve. But it all worked,” he says.

Perhaps the longest project he ever undertook was the half-scale, double-wing biplane, built from the model of a Stearman PT-17 Kaydet biplane.

The project took 6 months to complete, as he built the bottom wing first before moving to the top wing. The plane’s wings alone include 1,344 horseshoes, which doesn’t include the number of shoes that were used in the body.

Smith used the rear axle out of a tractor-trailer to build the massive pipe the plane sits on, and the whole plane spins and the propeller turns as it’s moved by the wind. Smith used baling wire for the hair on the pilot and passenger and, of course, the hair is blowing backward to mimic flight.

“A boy I knew had a sawmill and he cut the propeller out and set it in there angling and ran the saw down both sides to get it 1/2-inch thick. Then he got a wood chisel and chiseled it out to get the taper right,” he recalls.

Show Us Your Old Shoes

Smith also has built dozens of steel Christmas trees out of horseshoes that have been given to families and friends. He’s also built a 15-foot horseshoe, a 27-foot-tall spinning sphere and another creation consisting of three concentric orbs.

In addition, Smith built a rotating tornado with horseshoes, using scrap steel and old farm parts. It features a 20-foot pipe in the center, an axle from an 18-wheeler, and a 1/2-inch rod frame.

Smith also used horseshoes to create a football featuring the University of Oklahoma’s “OU” logo. This masterpiece stood 8 feet, 4 inches from top to bottom and measured 5 feet, 2 inches from side to side. Brand new horseshoes were used for that creation.

Smith typically doesn’t sell his work. And he insisted during a recent visit that he’s not done yet, even as he’s had to fight lung cancer in recent months. The family says he’s responding well to the treatments he’s getting in Oklahoma City.

“My creations are all imagination,” he says. “You figure out what you think you can do and just do it. And if can’t do it, forget about it and do something else. Just take a little different turn down the road.”

When you make up your mind to do the best you can with old horseshoes, that’s about all you can do.

[Video] How To Drill And Tap Horseshoes For Calks